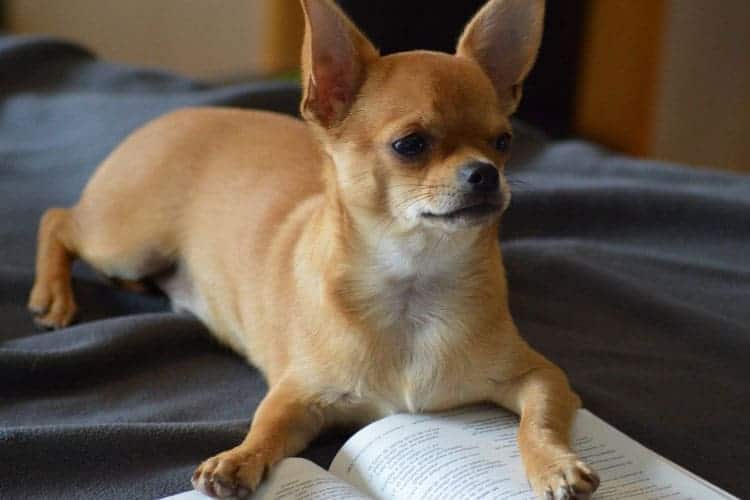 While it is generally easy to determine when an average dog is in heat, Chihuahua owners may face some extra challenges due to this breed’s almost obsessive cleanliness. This means that some Chihuahua dog owners may miss their Chihuahua’s first heat cycle simply because Chihuahuas are fastidiously clean and will lick away any proof of being in heat, explains Caroline Coile, author of The Chihuahua Handbook.

When Do Chihuahuas Go Into Heat Exactly?

The time they go into heat varies from one Chihuahua to another. On average, most likely, the first heat will occur any time between the ages of six and eight months. There are always exceptions, and a Chihuahua going into heat at five months or one year old is not unheard of. However, being a small breed makes Chihuahuas go into heat much earlier when compared to much larger dog breeds.

Signs Your Chihuahua Is in Heat

Now that you know when Chihuahuas go into heat, you may wonder how to recognize the signs suggesting it. The Chihuahua’s heat cycle lasts 21 days and includes the proestrus, estrus, and diestrus. The anestrus is a primarily inactive rest period. The process can be divided into four precise stages, each with distinct features listed below.

This phase lasts anywhere between four to nine days. During this time, your Chihuahua’s reproductive tissues may appear puffier than usual. The most evident sign is vaginal bleeding; however, as mentioned earlier, you may barely notice this if you own an overly clean Chihuahua that will lick away any evidence. Male dogs will be interested in your Chihuahua, but she will not allow them to mate.

This phase lasts anywhere between four to 13 days. The bloody discharge observed in the previous stage will fade and be replaced by a pink or straw-colored shot. During this phase, your Chihuahua is officially in ”standing heat,” which means she will stand still with the tail pulled to the side, allowing the male to mount. This is the phase when she is at the peak of her fertility.

Anestrus is the phase during which the reproductive organs get to rest, typically lasting between two and three months. While this sounds much like a quiet idle time, in reality, your Chihuahua’s pituitary glands and ovaries are getting ready for the next proestrus phase, several months ahead. Consider that Chihuahuas generally go in heat once every five to eight months, so your Chihuahua will most likely go in heat twice a year.

Learning when Chihuahuas go into heat is fundamental for any average dog owner or prospective breeder. If you are a dog owner, you must secure your Chihuahua and keep her safely away from intact males. If you are planning on breeding your Chihuahua, you must determine the best time to produce to heighten pregnancy chances. However, it is imperative to research and learn to be a reputable Chihuahua breeder after reading the critical considerations about breeding Chihuahuas.

How to Care for a Chihuahua in Heat

Upon recognizing the signs of heat, you must do what you can to protect your Chihuahua from the attention of males if you are not planning on breeding. If you still have difficulty deciphering the potential signs of heat, rest assured that the behavior of intact male dogs will let you know. Do not be surprised if male dogs will show up on your doorstep. According to the American Kennel Club, a male dog can detect a dog’s scent in estrus up to five miles away!

As a responsible dog owner, you must do as much as possible to keep your Chihuahua away from males. Avoid the dog park, and if you must take her out, have her leashed at all times. Never underestimate the persistence and determination of intact male dogs. They can be pretty creative and use astute planning to dig under or climb over a fence to get to her. Also, watch the door: even though escaping has never crossed your Chihuahua’s mind. When in heat, roaming is more than a mere possibility.

Preventing your Chihuahua from urinating

Preventing your Chihuahua from urinating all over the place will keep males at bay since females frequently urinate during their heat cycle to leave ”calling cards” denoting their availability. The urination may not be isolated indoors; some female dogs will have no problem urinating in the home. And just in case you were wondering about how to protect your furniture and carpet from that bloody discharge, you can invest in a pair of britches, special panties for dogs in heat.

If all the above sounds too much work, consider spaying your Chihuahua. Spaying is behaviorally and medically beneficial for your dog in many ways and will solve the problem of unwanted puppies, reducing the enormous burden of pet overpopulation. The ASPCA claims that millions of healthy dogs and cats die yearly in the United States because there are not enough homes for them.

When do Chihuahuas go into heat? The answer to this question is critical if you are planning to breed your Chihuahua. Therefore, you must do your homework well to heighten the chances of getting her pregnant. Whether you plan to produce her naturally or resort to artificial insemination, you must figure out the days she is most fertile.

In natural breedings, male dogs know when the right time is, and females will stand for them. Generally, this happens between the 8th and the 15th day of heat. Counting from when your Chihuahua started bleeding, explains veterinarian Margareth V. Root Kustritz with the University of Minnesota. There are no guarantees that mating on these days will result in puppies. However, breeders have found that allowing breeding every other day starting from the 7th day of heat up until the female will enable it to heighten the chances of success.

Your Vet Can Help

Suppose you are artificially inseminating and must figure out the most fertile days. In that case, your veterinarian may help by assessing cells collected from a vaginal swab or measuring progesterone levels in the blood. Artificial insemination should be performed twice, two and four days after ovulation, further explains Margareth V. Root Kustritz.

Regardless of how you intend to mate your dog, breeding is a tough choice, especially when it comes to a breed such as a Chihuahua, which has a far more risky pregnancy compared to other larger species, explains Marli Medinnus, a professional breeder of AKC Longcoat Chihuahuas in San Jose, California.

it would help if you never bred Chihuahuas on their first heat. They are too young, and giving birth may lead to complications. They should be produced instead for the first time during their second or third heat. And before turning three years old. Your Chihuahua should also have the correct conformation with a wide pelvic area. And an excellent tuck-up to heighten the chances of carrying and delivering the pups safely.

The Process Can Be Costly

Breeding requires a lot of expertise, knowledge about genetics, and the ultimate goal of improving the breed. Costs must also be evaluated since Chihuahuas are prone to requiring cesarean sections, not to mention expenses associated with testing breeding stock for heritable defects and genetic diseases.

Shots, X-rays, puppy shots, and other unexpected medical treatments are more expenses that it must add to the list. But there is much more than that. If this sounds like a lot of work, your best bet is to spay your Chihuahua and allow her to live her life to the fullest since breeding can also considerably shorten her expected life span.