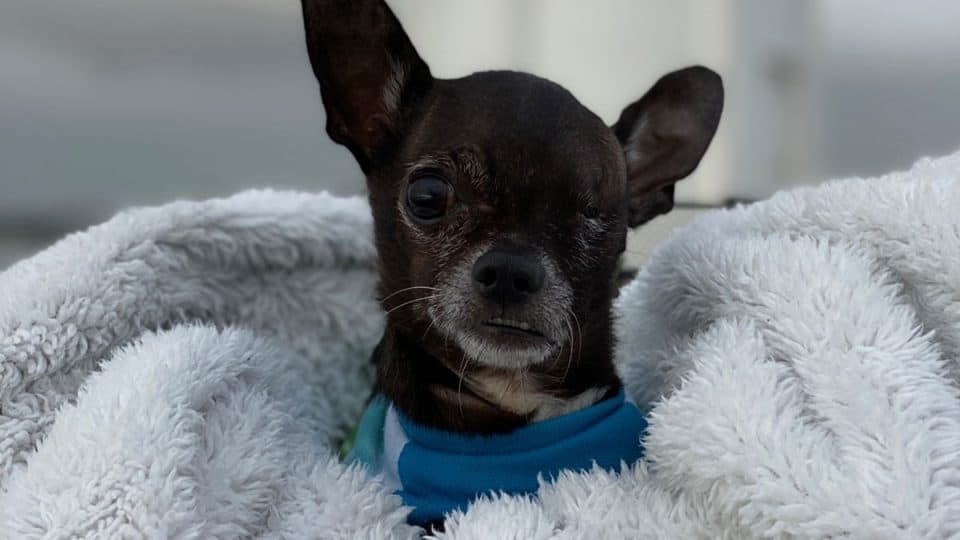 Morty the Misfit Will Prance His Way Into Your Heart

A little special needs dog has pranced and danced its way into people’s hearts worldwide.

In 2020, four-year-old Morty was taken in by Texas pet rescue, Long Way Home Adoptables, after his foster mom, Tammy, an experienced rescuer, spotted the chihuahua in a “free dog” ad.

One of many dogs in his original home, Morty had extensive medical issues that were never treated, including an ulcerated eye, and he was kept isolated.

“He spent the majority of five years locked alone in various rooms in the house,” said his adoptive mom, Danielle.

Tammy kept Morty as a foster, and Long Way Home set him up with their vets and got all his needs taken care of. He had surgery to remove his eye and seven rotten teeth and had complicated neuter surgery.

When Danielle and her husband Angelo saw a photo of Morty posted on Long Way Home’s Facebook page looking for an adopter, they filled out an application and arranged for a Facetime meeting.

Tammy told Danielle and Angelo that Morty didn’t react to anything, and she wasn’t sure if he’d ever be able to recognize his people because he hadn’t shown any signs of it up to that point.

“While talking to us, she stood up to show us how he walks,” recalled Danielle. “He’s unstable sometimes, and she wanted us to see his wobble.”

As Tammy talked, Morty started following her around the yard, jumping at her to pick him up.

“She was so excited to see him suddenly blossom while we were there on the phone, and we all think it was a little sign that he was meant to be ours,” said Danielle.

Several weeks later, Morty was on a transport van to a New Hampshire rest stop an hour from Danielle and Angelo’s home in Maine, and on December 1, 2020, Morty was officially home. 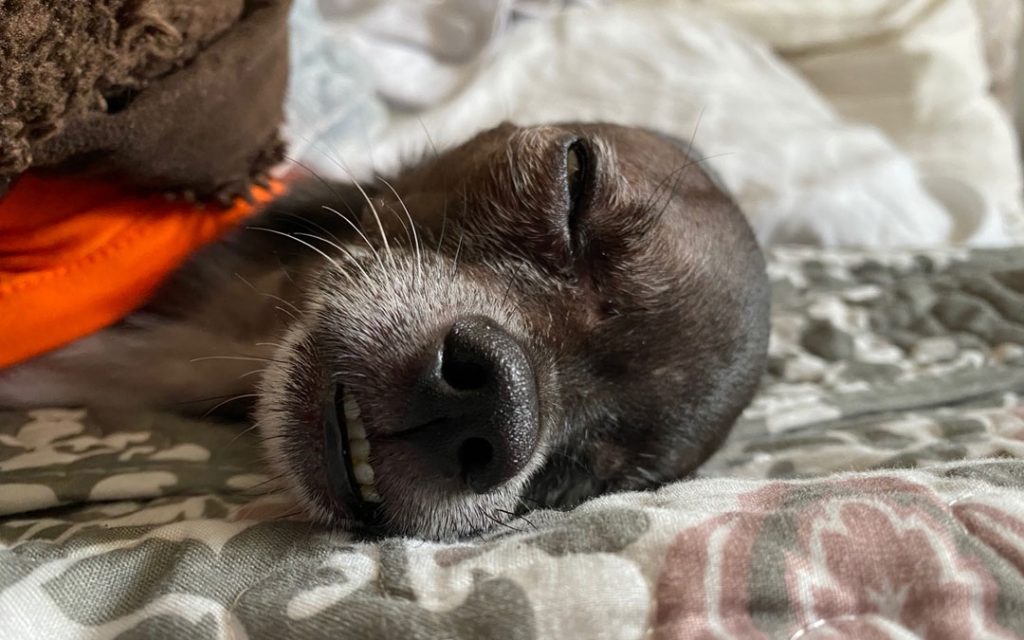 Morty is enjoying a cozy nap. Photo courtesy of Danielle and Angelo

Morty was nervous when he first arrived in his new home, but he relaxed and got cozy after having a bath and putting on his llama jammies.

A few weeks later, he began his adorable prancing, which Danielle said is a symptom of hydrocephalus, a congenital disability.

“It’s called a neurological gait,” she said. “It’s when their brains tell them to make exaggerated movements. We had no idea he did it until he got comfortable with us after he arrived.”

A little, unloved, unwanted dog is now spending his days living his best life while bringing joy to other people.

Danielle began doing recordings of Morty’s prancing as a way to share him with friends and family.

“I just thought it would be cute,” she said. “And it exploded by accident.”

Morty, the Misfit’s prancing to Harry Belafonte’s “Jump in the Line” went viral, spreading his story like wildfire.

The timing of the songs Danielle chooses and Morty’s tiny footsteps are spot on.

Morty loves to wear capes, sweaters, and hoodies, and his outfits have become part of the fun.

“We quickly learned he hates being naked, so we change his clothes every morning like a human, and he loves that little part of his routine,” said Danielle. “People from all around the world have sent him clothes and gifts.” 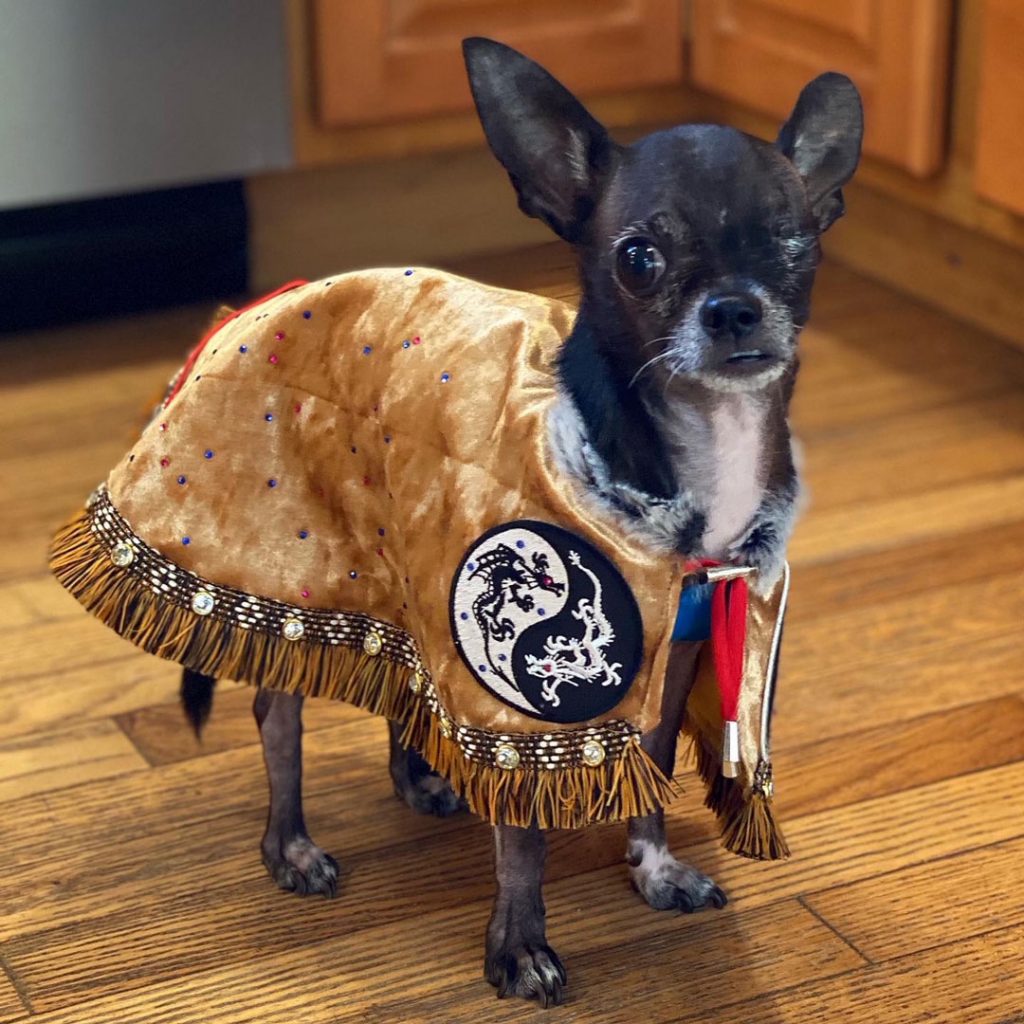 Morty has many artistic admirers, from a DJ who creates remixes of Morty videos to painters who have created beautiful illustrations of the tiny dynamo.

Australian artist Trevor McDonald was inspired to create an adorable cartoon of Morty.

“I originally drew the picture for Morty’s parents, as they shared a story with us about his poor sleep habits, and I thought it might give them a smile,” he said. 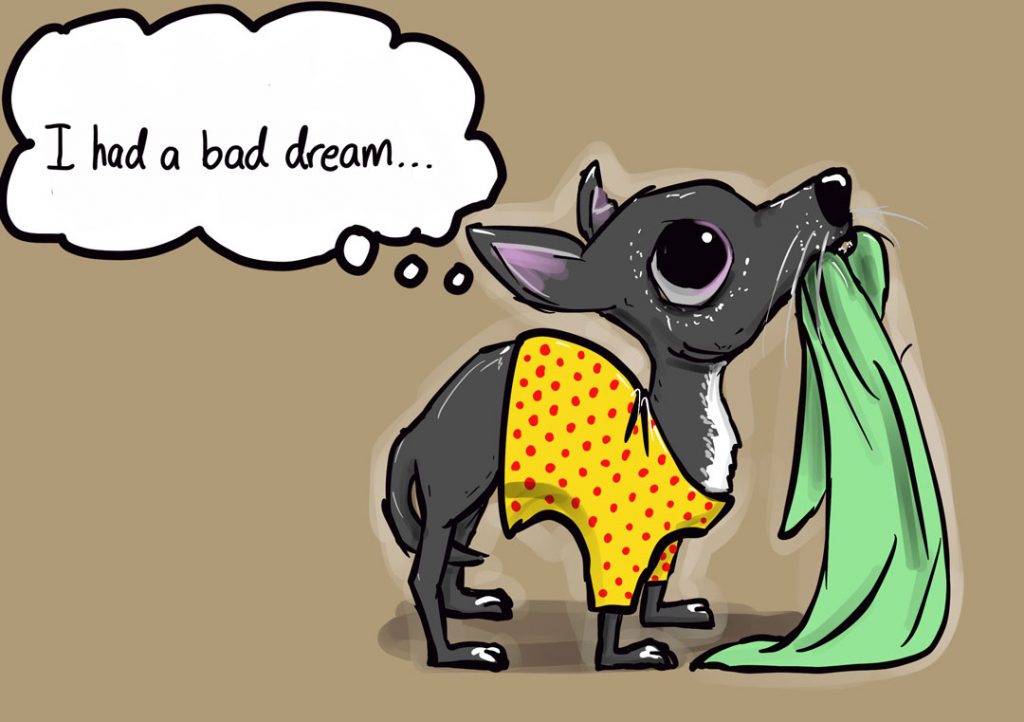 Morty is well-known for his nocturnal wanderings and temper tantrums.

“He goes through phases of being panicked and wanting to be near us 24/7 to being fine,” said Danielle.

A Bright Light in Difficult Times

Danielle said she gets a lot of private messages from people all over the world telling her that Morty has helped them through a difficult time in their lives.

“People have lost loved ones, their pets, they’re struggling with illness or depression, and that makes sharing him that much more special,” she said.

“When you get a message that Morty is part of someone’s bedtime routine with their kids, or he helped someone smile when all they’ve done is a crfor day, that’s pretty amazing. I even had a woman contact me who had previously lost her child to hydrocephalus. She said seeing Morty so joyful and free-spirited despite all of his difficulties brought back happy memories for her. Those messages are the responses that make me so proud. This little unloved, unwanted dog is now spending his days living his best life while bringing joy to other people. That’s a cool thing to be a part of.” 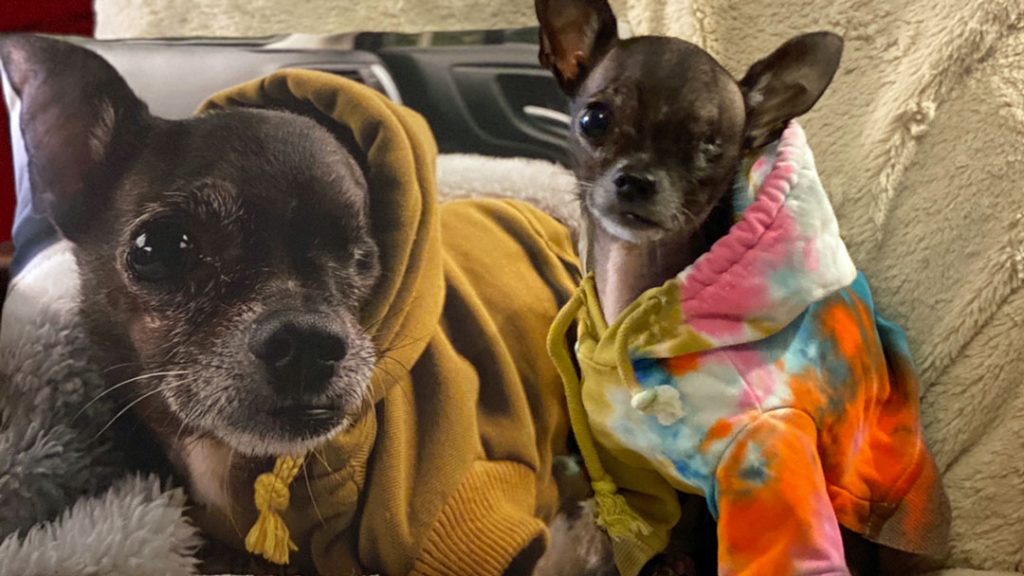 Morty (right), pictured with one of his many gifts, a Morty pillow. Photo courtesy of Danielle and Angelo

Morty’s fans, known as “Team Morty,” help raise awareness about special dogs like Morty. Raise money for those who fight for them every day, and encourage foster and adoption.

Morty still has extensive medical issues. Including a rare condition called syndrome of inappropriate antidiuretic hormone secretion (SIADH). It causes the body to produce too much water. Morty, Danielle, and Angelo take everything day by day.

“Some days are harder for him than others, but he’s pleased with us. And we do our best for him with the help of our exceptional vets,” said Danielle. “He has regular and special veterinarians who have gone above and beyond for him, and we’re very grateful for that. He may not live a long life, he’s already defying so many odds, but we appreciate every day we get to have him here with us.”