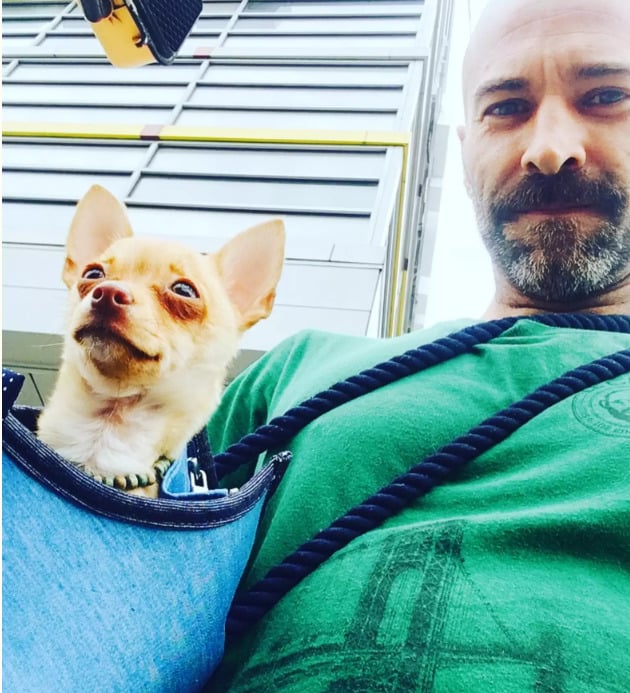 “Before Max, I had no idea of the depth of love, emotional support, and companionship a dog could bring.” A sick Chihuahua gave him so much love.

Jason A. Bradford, a 44-year-old self-employed massage therapist and holistic healer with his own company, Body, Mind & Spirit Works, was in the wrong place a few months ago.

Between malnutrition, high fevers, and other ailments, Bradford’s body went through a lot. He needed a lot of medicine and rest and couldn’t eat any solid food for weeks at a time. During a sleepy visit back to Facebook after being offline for a while, Bradford saw a post from a woman about a dog she was fostering. He then found himself getting dressed and preparing to see this dog.

“I was weak and disoriented, but my instincts took over, and I rallied to get dressed and bike to meet him immediately,” Bradford told us. “I had been mulling over the idea of a cat to keep me company better than my fish tanks could, but a dog has never been on my mind. This was purely instinct, no logic whatsoever.”

Bradford fell in love with the tiny Chihuahua.

Bradford fell in love with the tiny Chihuahua when he first met him. According to Bradford, the dog fit in one hand. “He seemed healthy and cared for, despite having survived parvo, and had been quite ill for several months.” For those unfamiliar with parvo — or parvovirus — it’s a contagious, viral illness that ravages the puppies and dogs unfortunate enough to contract it.

According to PetMD, about 70 percent of dogs survive parvo. However, the prognosis is much lower for puppies because their immune systems have not finished developing. A puppy has to fight an incredible battle to survive parvo. The Chihuahua in Bradford’s hands, for example, was five months old at the time and weighed only 2 pounds, Bradford said.

Bradford said he knew, deep down, for no reason he could understand at the moment, that he wanted this dog to be part of his family. The foster sent word back to ACCT Philly, the region’s most significant animal care and control service provider, for which she was fostering the dog. While he waited, Bradford said he couldn’t stop thinking about the dog.

After Bradford’s adoption was finalized, he took the dog, whom he named Maximus LaRue (Max for short), home with him. During the first week, Bradford had to use eye drops to keep Max hydrated. Max had only recently started eating solid food and thus was pretty weak most of the time. Mirroring the journey of Bradford, who was only beginning to eat solid food again after a month.

Max, like Bradford, was still healing from his illness. The virus that Max battled is typically fatal for puppies. The little guy was hospitalized at one month old and was never guaranteed a tomorrow. Bradford said, knowing this, it makes each “first time” for Max a special occasion. “He was too little and weak to be outside or do much his first couple weeks. And he was quarantined, so he wasn’t allowed to play with other dogs,” he said.

His life has changed a lot.

That all changed when Bradford brought Max over to his friend Chloe, who lived a block away, to meet her dog. “He’d met a few [dogs], but [only] from the bag on my shoulder and not actually on the ground playing,” he said. “So when he was finally able to mingle with other pups, I … let [Max and Chloe’s dog] loose in the backyard. It was so special to watch him interact inquisitively with another dog for the first time in his life. It brought tears to my eyes to watch him be a dog … with another dog!”

Bradford explained that he quickly started to feel that the two were in sync. “I began to notice that if I drank water … so would he. And if I could muster the energy to prepare food … he would eat his.”

Bradford recognized that a dog like Max needed a little extra care. Animals like Max are often passed over and euthanized in shelters because they are too much work. Bradford wasn’t bothered, though. He said he could constantly feel Max’s love and gratitude like Max knew and understood his physical condition and how Bradford was helping him.

“He’s quite relaxed for a small dog and his breed, likely a result of being so ill and in a hospital for three months, and all he has is love for everyone and everything,” Bradford said. “He’s truly comfortable with anyone but barely leaves my side if I’m in sight. In the past couple of weeks, as I’ve been on bed rest, he has learned how to jump from a box to the chair and 3 feet across onto the bed.”

That’s not to say there weren’t challenges. “I’d have to say the biggest hurdle I’ve faced with caring for Max is the best gift. I’d been sick for weeks before getting him … [and], so I got even weaker after taking him,” he said.

Bradford said Max kept him from falling apart during their journey to better health. “There were days I was so much pain or so weak I couldn’t get out of bed. But to care for him, it was mandatory,” Bradford said. “A couple of times, while bent over in pain, his nibbles on my ears gave me the strength to get up and take him out or make myself something to eat. Max’s needs precede my condition, and we’ve been recovering together.”

“Before Max, I had no idea of the depth of love, emotional support, and companionship that a dog could bring,” he continued. “It was not until I, myself, went through a challenging experience and needed support that I understood how healing an animal like this could be.”