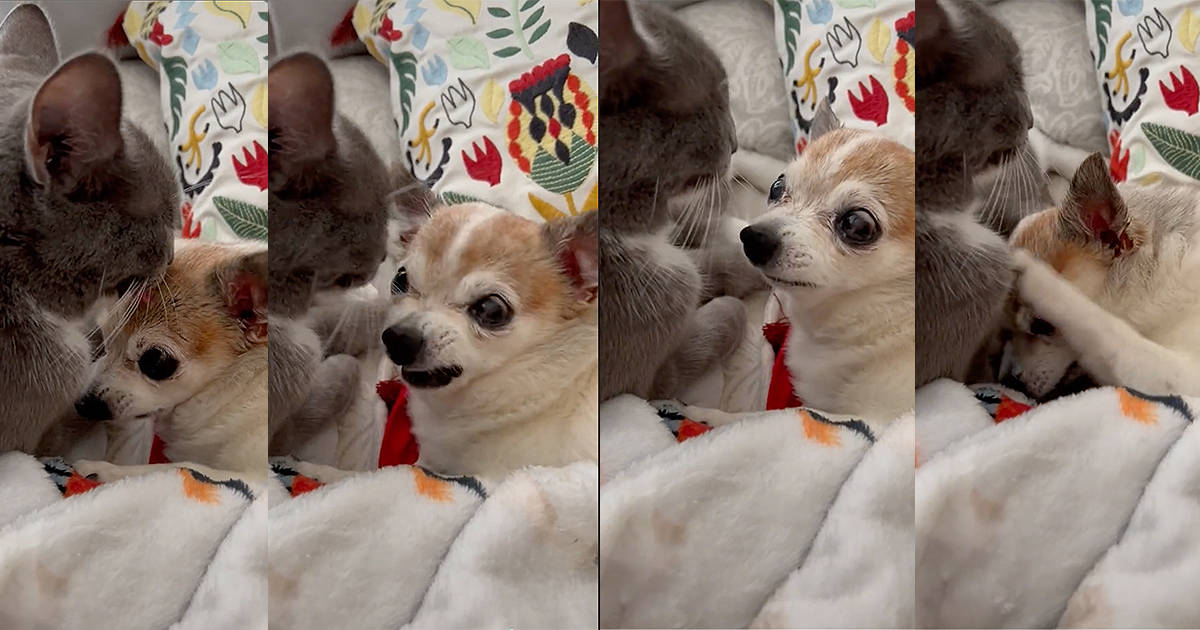 Cat and Chihuahua have been rivals since the beginning of time, allegedly. There are countless stories written about it and movies made about the rivalry. And just rumors and tall tales passed down from generation to generation. But the truth is, many cats and dogs get along beautifully, and some even accept each other as family.

“I’ve never seen a cat this loving and patient with a grumpy old chihuahua.”

Hobbs was adopted as a senior dog off the streets. So, he didn’t grow up with his now-feline siblings. He has trouble walking and will be as spicy as he wants. Nipping with his fragile lil old dog mouth whenever he doesn’t like something or someone.

However, Hobbs’ grumpy spicy heart has been slowly being melted into a cuddly baby with the help of his kitty sister, Pixie.

His mama comments on the videos that she has never seen or experienced a cat so patient and loving with a grumpy old small dog. Though Hobbs constantly barks at Pixie and nips his jaws toward her, Pixie never overreacts. She sits there with her eyes lovingly closed and waits until he’s calmed down. And then will attempt her sweetness on him again. She does this over and over again patiently until he is eventually asking for more love.

The video that has been recently going viral of the cat and dog is of Hobbs laying in Pixie’s paws, being grumpy. Pixie gives him a little loving like he is her kitten, and he will bark, pause, and claw at her for more. Then the cycle repeats. Pixie is patient, lets him bark and calm down, and then attempts the licks again.

He doesn’t know how to react to cuddles when he enjoys it, so she licks him, barks, and stops, but he doesn’t want her to. It’s simply adorable and the most wholesome. If only everybody could have that level of patients like Pixie dogs with Hobbs.