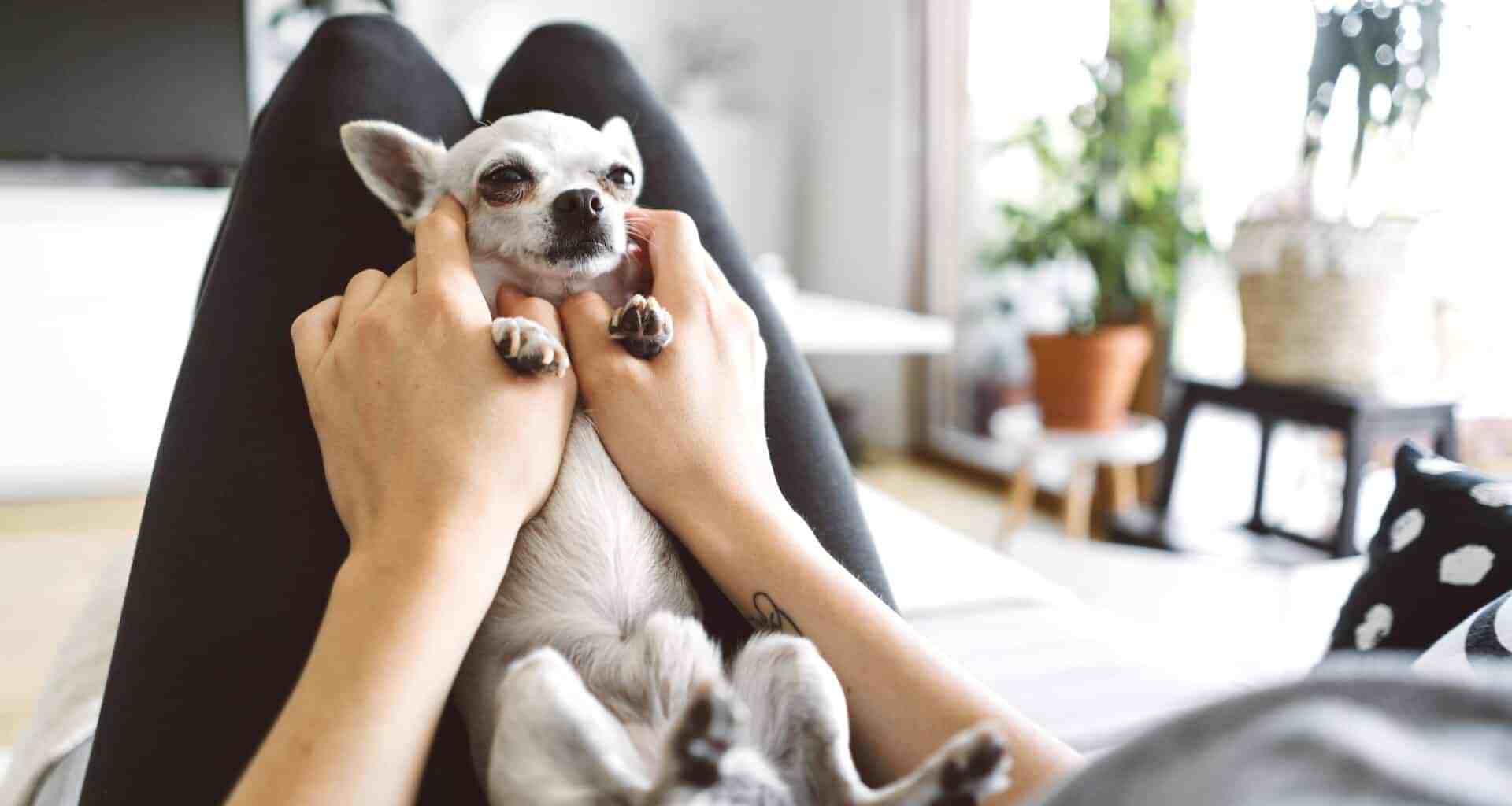 Descended from ancient Mexican breeds, the mighty Chihuahua is a small but proud dog breed. Chihuahuas are prized for their companionship and affectionate nature. These aggressive, joyful little dogs love life and attack it with gusto.

Origin and History of the Mighty Chihuahua

The Chihuahua’s origin is unclear, but there is a theory that their ancestors could potentially be the South American dog, the Techichi. In the 9th century A.D., a civilization known as the Toltec carved drawings depicting a dog resembling the mighty Chihuahua.

The Aztecs conquered the Toltec civilization and believed the Techichi had the power to heal the sick and safely guide their people to the next life.

The version of the Chihuahua known today was discovered in Mexico sometime later, in the 1850s. American travelers adored the dogs, who brought them back to the states. They were recognized by American Kennel Club (AKC) in 1904 and have remained one of the most popular breeds since the 1960s.

Chihuahuas frequently form attachments to a single person. Yet, they are usually willing to make new friendships if appropriately introduced. That’s especially if they have been properly socialized.

According to the AKC breed standard, the Chihuahua’s body is just slightly longer than it is tall and compact. The topline is level, and the tail should be carried either sickle or curved over the back. The Chihuahua should be well-balanced and should not exceed 6 pounds. There are tiny “teacup” Chihuahuas, but they are usually not particularly healthy.

The head is this breed’s most distinctive feature. The skull is well-rounded and is often described as an “apple head.” The eyes are full and round and should convey a saucy expression. The ears should be large and erect, and they should flare to the sides at about a 45-degree angle when the dog is relaxed.

The muzzle is moderately short, and the stop is well-defined where the muzzle meets the head. The bite is either level or scissored, and bites that are overshot or undershot are considered a severe fault. Any coat color is permissible, including solid colors and dogs with markings or splashes.

The Chihuahua, also known as a Chi, may be the smallest dog breed. But, they certainly pack a wallop in the personality department. Although many may still have that image of the trembling chi so prevalent decades ago, today’s Chihuahua is a different customer. Thanks to the beautiful work of responsible breeders, the Chi fancy has significantly improved the temperament of this adorable breed.

Members of this breed are more likely to be the Kings and Queens of all they survey. They are pretty robust and even Terrier-like in temperament and full of self-confidence. Of course, every dog is an individual. But, overall, the improvement in personality has been amazing. We should note that while these dogs have a natural love for children, their tiny size does not make them the best pets for young children.

This breed is territorial, believes deeply in the pecking order, and will bully each other to establish their place in the order of dominance in their family group. Usually, these issues resolve themselves. But, if you find two of your pets are trying to take charge, you’ll likely have to resign to keep them separated.

Training seems to be Chihuahua’s one weak point. That’s not to say they are not intelligent enough to learn, because they are. However, these dogs are driven by strong territorial instincts, which results in wetting around the house to mark territory, and females seem to be no better than males in this respect.

This means you must be diligent when commencing potty training and be sure to clean up any accidents thoroughly so your pet isn’t drawn back to that spot. Some owners find that using a litter box or potty pads is helpful.

The mighty Chihuahua does take well to obedience training. And they can learn to follow consistently given commands. Agility training also seems to appeal to their mindset, and there is nothing so adorable as the sight of one of these little, mighty mice racing around the course at full tilt.

Due to their affectionate and gentle nature toward humans, these toy dogs also make excellent therapy dogs, and they certainly brighten the atmosphere during nursing home visitations.

These little dogs only require 30 minutes of exercise every day. A stroll through the park will provide the training Chihuahuas need to stay happy and healthy. They’ll almost certainly request more practice than they can handle, so it’ll be up to you to figure out when they’ve had enough.

As with most breeds, there are health concerns before bringing home your furry companion.

A common hereditary condition involving dislocation of the kneecap. Sometimes referred to as a floating patella or slipping kneecap, the problem occurs when the kneecap moves from its normal position causing the dog to limp. In most cases, surgery can correct the problem.

A mighty Chihuahua has a tiny mouth, often overcrowding its teeth. When teeth are overcrowded, food is easily trapped between them. This causes tartar and plaque to build up. Sometimes, they have to remove their teeth or lose them at an early age. Another tooth problem in Chihuahuas is the retention of puppy teeth. When this occurs, the adult tooth grows next to the puppy tooth.

It occurs when a Chihuahua’s blood sugar levels become extremely low. The low levels cause the dog’s body to go into shock, generally referred to as sugar shock. When this occurs, the dog becomes weak because essential nutrients cannot reach its body and brain. Many dogs become very sleepy or show an extreme lack of energy. They may begin to shiver, exhibit a lack of muscle coordination, and seem disoriented. The condition can result in seizures, coma, and death if not appropriately treated.

While puppies of most breeds are born with an opening in the bone at the top of their skull, it closes with maturity. According to the Chihuahua Club of America, the Chihuahua’s opening, called the molera, may naturally remain open all their life and is not a cause for alarm. This means that you will always need to have some care for your pet’s head, but this rarely presents a problem unless the opening is vast. An exceptionally wide molera at birth could be a sign of hydrocephalus (water on the brain), and though very rare, it’s worth examination by a vet. Just note that the presence of molera does not automatically mean a Chihuahua has hydrocephalus.

Chihuahuas are a healthy breed that often lives 12 years or more.

Grooming a pet Chihuahua is relatively straightforward. The breed comes in two varieties; smooth coat and long coat. The smooth-coated variety is a breeze to bathe and dry. And, even though the long coat carries more hair, it is still reasonably easy to maintain as long as you take care to comb through the fringes and the skirt at the rear. You can bathe your dog as often as once a week.

Toenails and ears do need to be checked more regularly on this breed. Since they do not spend the time running around as other species, they don’t have the opportunity to wear their nails down, so they keep their nails clipped. Clean their ears out twice a month with a cotton swab dipped in a bit of alcohol.

Famous Members of the Breed

The Taco Bell Chihuahua brought a great deal of attention to the breed. Though, this dog was not the best representative of the standard. However, chi is chi, and Gidget made her mark. Her influence was also felt at Chihuahua rescue programs across the nation. This was when hasty owners surrendered their pets after realizing the amount of attention the breed required.

This famous dog sparked a love for the mighty Chihuahua. But, it also provides an excellent example that you should be completely aware of the breed you are adopting before bringing them home. Don’t bring a breed home because they’re famous or you’re captivated by an advertisement. Choose a breed that’s best for you based on your family’s lifestyle and what you’re looking for in a dog.

Purchasing or Adopting a Chihuahua

If you’re looking for a Chihuahua puppy, the Chihuahua Club of America is an excellent place to start. The club has a breeder directory, as well as helpful tips on finding responsible breeders with quality dogs. The AKC Marketplace page also has a breeder search. Expect to pay around $400 to $800, although higher-end show dogs from champion lines can cost as much as $2,400.

If you’re not particular about a puppy-age Chihuahua and would be interested in a rescue dog, you can begin your search on PetFinder and Save-a-Rescue. You can also search breed-specific rescue organizations:

Is This the Breed For You?

If you live in a home with young children, you may want to consider looking at other, more hardy small breed dogs. If you reside in a house with older children and adults, or you live alone and are searching for a small breed, you can cart everywhere with you quickly; this could be the breed for you.

They are peppy but don’t require excessive exercise and adjust well to apartment living. Before deciding to purchase or adopt this breed, do your research and check off the boxes to see if this breed is what you’re looking for. Then, take the following steps toward bringing one home.

Despite a rough start as a “bait dog,” she’s a smiley girl.…
We use cookies on our website to give you the most relevant experience by remembering your preferences and repeat visits. By clicking “Accept”, you consent to the use of ALL the cookies.
Do not sell my personal information.
Cookie SettingsAccept
Manage consent