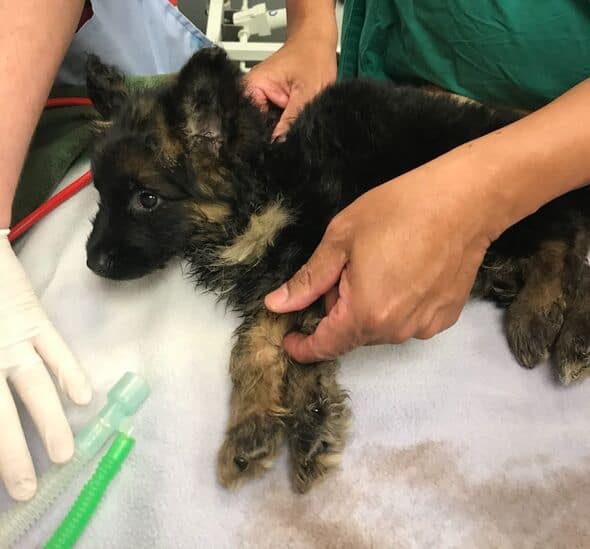 TWO helpless puppies were dumped in a cardboard box in a London park during the Platinum Jubilee weekend.

The two black and tan German Shepherd pups were discovered by a shocked member of the public at Seven Kings Park, Ilford, on Sunday afternoon. RSPCA inspector Philip Heyes was called out to the puppies, one of which had already died.

The other pup, who is just five weeks old and should still be with his mum, is now fighting for his life at one of the charity’s veterinary hospitals.

Mr Heyes said: “A passerby discovered the two tiny pups inside a cardboard box dumped in a hedge at the park while he was watching cricket nearby.

“He heard a noise and went to investigate.

“The puppies are only around five weeks old and both were very weak and sick.

“He contacted us and went back to the park to check on them. But, sadly, the second puppy had already died.

“When I went to collect them the male collapsed on top of his dead sibling; it was heartbreaking.

“I rushed the surviving pup to our veterinary hospital where he was given emergency treatment.

“He’s still on a drip and is receiving round-the-clock care.