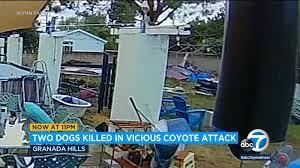 1 Two tiny chihuahuas were killed by coyotes Sunday morning at home in Granada Hills. This comes after a coyote was euthanized after it attacked a little girl in Woodland Hills.

The dog owners, Tamara and Doug Wynn, spoke with Eyewitness News. Moreover, they said the attack happened in the backyard of their home on Encino Avenue.

Moreover, they shared a video showing the moment of the attack. You can hear the dogs screaming in the background. Both chihuahuas died of their injuries.

This comes after a coyote attacked a young girl in front of her home in Woodland Hills.

The California Department of Fish and Wildlife has contacted the USDA for assistance. Wildlife Services, the coyote was captured and has since been euthanized.

However, the doorbell video shows a coyote dragging a young girl to the front. The lawn of a Woodland Hills home until her father chases the animal off.

Also, earlier this year, one Woodland Hills resident captured video of a coyote sneaking. Into her home through the doggie door.

A coyote prowling a Woodland Hills neighborhood made it’s way right into a home, and it was all caught on home surveillance video.