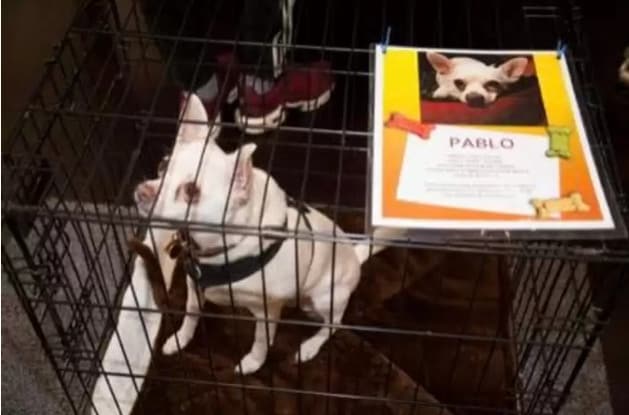 Why Owners Left Their Chi With Pet Sitter

He waited five months until someone helped him, but now he’s the happiest, funniest little dog 💕. In late 2016, Pablo’s dog family left the Chihuahua to the pet sitter and decided to never return for him.

Terrified and nervous in the unfamiliar place, Pablo wouldn’t do anything but bark. It had been weeks since he had last seen his family, and he didn’t know what had happened to them.

After five months, the pet sitter didn’t want to listen to the noise anymore — so he posted online that he would be bringing the dog to a kill shelter or selling him on Craigslist.

“We learned that Pablo was being forced to live in a closet because he was ‘barking too much,'” Michele Walsh, the adoption coordinator for AMA Animal Rescue, told The Dodo. “We jumped in and took him immediately.”

Although he was finally safe, Pablo’s fears were far from over. He was so afraid of everything that the barking continued — and he barely let people come near him.

“He was terrified of men,” Walsh said. “We don’t know everything that happened in his life to traumatize him so badly, but we have to assume that he had a horrible experience involving a man.”

After being health-checked at the vet, Pablo was cleared to move on to a foster home that could help him tackle his fears and cut down on the barking. When looking for a foster home, Walsh was concerned that Pablo wouldn’t open up to anyone — but when Pablo met a potential foster, Alexia Perimone, he connected with her instantly.

“It was amazing to see,” Walsh said. “Within 15 minutes, he was licking her hand, and that was it. He asked her to be his foster mom.”

Once he was settled in, Pablo began six months of regular training sessions to help build his confidence around people.

“He went from barking so much that he was losing his voice to learning to relax at home,” Walsh said. “He did so great with his foster brother and sister, too. They showed him the way.”

By December 2017, Pablo was finally ready to be placed up for adoption. It wasn’t long before Maura McHale, a Queens, New York resident, fell in love with his photo online.

“I saw Pablo, and that was it,” McHale told The Dodo. “I had wanted a Chihuahua for the longest time and just knew he was the one.”

She was approved to adopt him soon after. On the ride to his new home a few weeks later, Pablo knew he was never going anywhere else again.

“The minute we drove away, he crawled into my lap and started kissing me,” McHale said. “All he wants is just someone to be with. It was amazing to see his personality come out.”

“His favorite thing to do is dance,” McHale said. “He gets up on his hind legs and prances around. He’ll get excited, knock the pillows off the couch and start dancing.”

Knowing everything he went through with his former owners, the best reward for McHale is knowing he’ll never have to worry about where his home is.

“It’s such an awesome feeling seeing how happy he is, knowing he isn’t going anywhere else,” she said. “He’ll always be right here with us.”