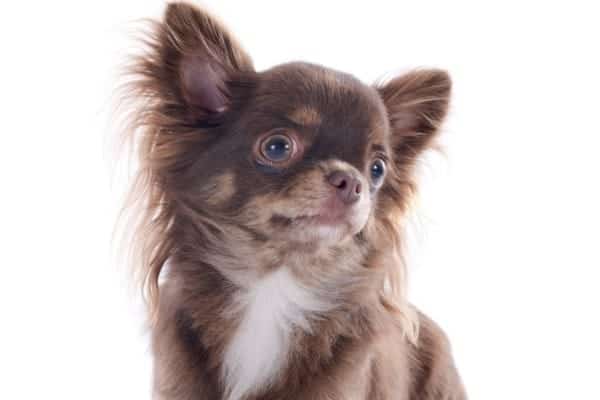 A Guide to the Apple Head Chihuahua

What Is an Apple Head Chihuahua?

Regarding Chihuahuas, the “apple head” variety deserves a spot of honor. Why is that? An apple head Chihuahua is the breed’s specimen par excellence. In other words, it conforms to breed standards. Therefore, it reflects what one should expect to see when the word “Chihuahua” comes to mind. In other words, it is the poster child for the Chihuahua dog breed.

The apple head feature is a distinguishing physical characteristic expected of the breed. According to the American Kennel Club standard for the species, the Chihuahua is expected to have “a well rounded, ‘apple dome’ skull, with or without a molera.“

A molera is a recessed area on the top of the dog’s head that appears at birth. The molera is similar to the “fontanelle,” or soft spot, often on a human baby’s head. This recessed area makes the Chihuahua’s head assume a shape that has been compared to the top of a cooking apple. In addition, the dog’s head is also compared to the fruit because the skull’s dome is much broader than the jaw.

The Chihuahua Club of America describes the breed’s head as having a distinctive “stop” at an almost 90-degree angle when looking at its profile. The stop describes the curve from the forehead to the muzzle, a more prominent feature in certain breeds.

How Much Do Apple Head Chihuahuas Cost?

If you are interested in opening your heart and home to an apple head, you may wonder how much one costs. Reputable and ethical breeders will not jack up the price tags on these dogs because they know that apple heads are simply Chihuahuas bred to standard.

However, unethical breeders tend to inflate their prices by making buyers believe they are selling a rare variety. Again, apple heads are not challenging to find; they are bred to standard.

So what’s the average price for this particular dog? Generally, fees range between $300 and $800. But prices may be significantly higher (more than $1,500) for a dog with championship lineage.

Consider it a big red flag if you find a breeder that sells at a premium price without providing a reasonable explanation and documentation of lineage. This means you may be dealing with an unethical breeder.

If an apple head is a Chihuahua with a head that conforms to the standard, what are other specimens of Chihuahuas with different head shapes called? I’d like to introduce to you the deer head Chihuahua. Because they commonly boast a fawn coat, they look similar to a little deer, hence the name.

Unlike the apple head with its moderately short muzzle, the deer head has a longer nose and a narrower muzzle. And rather than a 90-degree angle at the stop, the deer head has more of a slope when you view its authority from the side. This slope gives the deer head a “foxy” expression that many people find appealing.

While the deer head may not adhere to the breed standard, its less developed, dome-shaped head comes with many perks. For instance, deer head Chihuahuas are less likely to suffer dental or breathing problems. On top of that, they endure more uncomplicated deliveries, as the apple head Chihuahua’s giant skull is more challenging to pass through the birth canal, and often, a C-section is required.

Deer head Chihuahuas, with their longer muzzles, more oversized ears, and broader set eyes, were very common from the 1950s to the 1960s. Unfortunately, they quickly fell out of fashion once the Chihuahua Club of America developed a list of traits considered appealing in the breed. These traits included a rounded head, smaller ears, and more enormous eyes. However, just because the deer head does not conform to breed standards doesn’t make this dog any less of a Chihuahua.

They may not win in the show ring, but they are just as lovable. Many Chi lovers find the deer head to be more appealing. Consider that Gidget, the famous Taco Bell mascot, was a lovely deer head Chihuahua! Regardless of head shape, Chihuahuas have the potential to make excellent companions, and a deer head can be just as valuable.

This content is accurate and true to the best of the author’s knowledge and is not meant to substitute for formal and individualized advice from a qualified professional.

Answer: In general, Chihuahuas are expected not to weigh over 6 pounds. This information comes from the American Kennel Club standard for the breed.

Answer: Chihuahuas are small dogs and therefore are blessed with a long lifespan compared to medium and large dogs. Generally, a healthy Chihuahua may live an average of 15 years; some even make it to 17 or even 20 years old.

Question: How can I tell what type of Chihuahua I have?