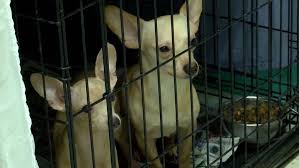 Fifty animals are now safe, thanks to the tireless work advocates. The advocates have rescued 50 chihuahuas from a hoarder situation after the owner passed away.

It is always sad and sickening to learn of a hoarding situation and see the dogs coming out of it.  This is one of those stories that will make you truly appreciate the work the rescues do.  It is not an easy job. Emotionally or physically, I’m not sure I could do what they do over and over. But I am glad they do it!

Dogster posted how they rescued Chihuahuas from another hoarding situation in Bakersfield.

San Francisco nonprofit Rocket Dog Rescue volunteers are preparing for a second trip to Bakersfield. And after traveling there last weekend to rescue nine Chihuahuas from a dog-hoarding situation.

Rocket Dog founder Pali Boucher says two dogs have already found new homes. Two others are in foster homes that might become permanent. And the others are fostered.
About 50 dogs were in the home, which she described as “awful living conditions.”

They are all around a year old and lovely and loving despite what they have been through,” Boucher wrote on Rocket Dog Rescue’s Facebook page.

She says she is unsure how many dogs she and other volunteers will bring back from Bakersfield when they return.

Boucher says the woman who was keeping the dogs is working with Rocket and other rescue groups despite the horrific environment we found the dogs in. “That’s the way I like to help,” Boucher says, “before animal control steps in, as long as we have a system in place and the person is willing to work with us.”

Asked to describe the Bakersfield site, she says, “Whenever you have 50 animals in one given place, you’re going to have a very cluttered and squalid environment — it’s going to look pretty harsh.”

The first group of dogs:

The woman holding the dogs called Rocket Dog Rescue directly; Boucher says she believes the woman was trying to help the dogs, but somehow the situation got out of hand. Unfortunately, this is all too common in dog-hoarding cases.

The health problems in this group of Chihuahuas include cases of demodectic mange and some pneumonia. “We’re pretty good at trouble-shooting some serious illnesses,” Boucher adds that getting a large group of rescue animals spayed and neutered can cost thousands of dollars.

The first group of dogs taken by Rocket Dog was mostly in good health, which was intentional. Boucher says when there are a lot of animals to be rescued, she’ll take the ones in better condition first because they can find foster and permanent homes more readily. Volunteers will return to get dogs with more serious medical needs and behavioral problems, which could take longer to rehabilitate. Older dogs, which are also harder to place, are also included in the later rounds of rescue.

25 animals were at the site

Late last week, Rocket received the call and coordinated with other rescue groups in California, including Nuts’n Bolts Animal Advocates in Madera.

“We believe in working together as a team,” Boucher says. “We’re not territorial.” The first phone call indicated that about 25 animals were at the site, whereas 50 were discovered.

Boucher says small dogs such as Chihuahuas used to be relatively rare in shelters, but now they are among the most common. A recent case involved 16 Chihuahuas in a small apartment in San Francisco’s Tenderloin District. The animals’ owner moved to the Philippines, leaving the animals behind.

Boucher says the situation in Bakersfield and surrounding Kern County is indeed dire. Statistics from the Kern County Animal Control website reflect this. In 2011, slightly more than 1,800 dogs were adopted from the shelter, whereas around 10,000 were euthanized. The numbers for cats are lower, but the adoption-to-death ratio is worse. About 500 cats were adopted from the top, while more than 7,800 were put to death.

Asked the reason for this, Boucher cites overpopulation. “There’s just no place to put these guys,” she says.

Visit the Rocket Dog Rescue website to adopt one of the rescued Chihuahuas, donate toward the cost of the dogs’ care, or offer volunteer services.
I hope some of you out there are in a position to help and could take on one of these guys that need a little extra help to rehabilitate.