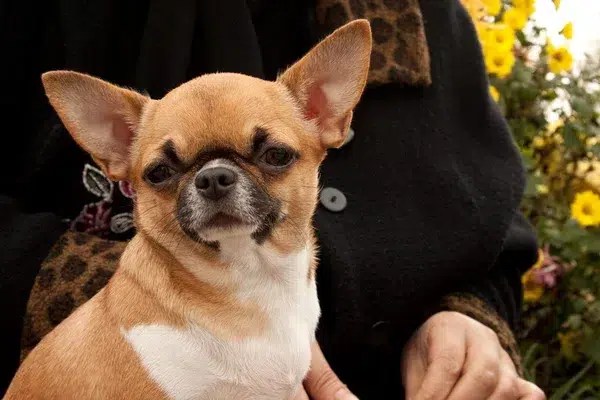 Are Chihuahuas Friendly, Loving, and Nice?

There’s no doubt about it. For small dogs, Chihuahuas have a big personality. But are being friendly, loving, and nice parts of that?

Here you’ll find out the truth. Keep reading to discover:

Chihuahuas are regarded as Toy Breeds according to the American Kennel Club (AKC). This group is also recognized in the Companion Dog category.

They are among the most popular breeds to own across the United States, ranking at number 33 out of 196.

Why? What makes them so desirable?

Turns out, there’s a lot to love about these little balls of energy!

This six-pound mini canine is said to have a ‘charming, graceful, and sassy’ character by the AKC.

Still, there’s a lot more to them than that. Many Chihuahua owners know that this breed has a fiery disposition.

Although they may be little on the outside, these pooches have a massive personality.

A deeper dive into the AKC analysis of this tiny ‘purse pet’ reveals the following traits:

This is part of why they are regarded as Companion Dogs. They always want to accompany their owners everywhere they go.

They’d go with you to the end of the world if you wanted to. But, since most of the time you only choose to go from room to room, so do they – like a second shadow.

Fact #2: Chihuahuas can be clingy

Because of how much they love their owners, it is highly likely that they will want (need, more like!) to spend every waking moment with you.

If this means sitting on your lap the moment you sit down, then so be it! Make sure you have enough time to dedicate to your pint-sized companion.

Otherwise, you may harm their emotional well-being.

Fact #3: Although they are very loving pups, Chihuahuas are aloof to new people

This is a byproduct of their loyalty.

Their owners are their entire world, so Chis may not trust a new person right away. It takes them time to build trust with a new Chihuahua friend, so be patient.

Chihuahuas are known to be demanding little things. This is because of how much attention they need from their owners. Many have even described them as ‘bossy.’

There is some truth to this. If you’re not careful in drawing boundaries for your Chi’s behavior, they will end up running the house.

The Chihuahua is an extremely devoted breed. It is known far and wide for its endless loyalty to its owner.

The Chihuahua inherited this deeply rooted trait from its Toltec ancestor, the Techichi.

This breed was a central component of Aztec culture. It is even known to this day to have been one of Montezuma’s most treasured possessions.

The Chihuahua’s status as a Companion Dog is a vital element of their loving disposition.

Their affection is certainly not a secret. Especially given how much Chihuahuas prefer to spend time alongside their owner.

This breed has been created for the primary purpose of keeping their owner company.

So, their disposition has been tailored to allow them to express the ultimate levels of affection and devotion.

They learned what some of the most essential traits for Companion Dogs, including Chihuahuas are:

Fact #4: One of the most important personality traits of Chihuahuas and other companions is affection

This trait was also known in this study as ‘human agreeableness.’ Chihuahuas are rated as a five out of five for their affection levels.

Fact #5: Companion Dogs are meant to bond very strongly with their owners

The dogs in this category are intentionally bred so that they will always keep their owners company at all times.

Meaning – these dogs are meant to provide emotional and psychological support. Some are even trained as guard dogs in many cases.

The lovely Chihuahua is no different, except for the guarding part.

Fact #6: Chihuahuas don’t do well in the winter, even the long-haired ones

You are most likely to experience the Chihuahua’s loving nature by spending quality snuggle time with your tiny pup.

Another major study looked into companion dog characteristics, too…

For this, participants took a 12-week-old puppy and raised it as a guide dog until it was one year old or older.

They measured the dog’s affection and loyalty by watching how often they stayed near the family.

They called this type of affectionate behavior ‘affiliation.’  The researchers learned that affiliation was not correlated with other traits, such as friendliness toward other dogs or people.

They did confirm something fundamental, though. Affiliation is a cornerstone of companion dog personalities.

This means that, no matter what type of Chihuahua you get, it will love you with all its little being.

When people ask whether a Chihuahua is ‘nice’ or not, they are more than likely referring to the dog’s inclination to bite or nip at other people (or dogs).

This breed can be quite tricky to measure when it comes to this particular personality trait. While Chihuahuas are not ‘mean’ dogs, they are not always chomping at the bit to play with strangers.

The experts of Vet Street rate the Chihuahua a three out of five for dog-friendliness.

This is quite a balanced estimation of the Chihuahua’s attitude toward other canines. You can’t blame them!

These pups range only between two to six pounds, so of course, they’ll feel comfortable playing with dogs that are their own size!

If you want to socialize your little Techichi descendant, you’ll need to be equipped with the following knowledge:

Fact #7: The AKC has described Chihuahuas as ‘clannish’

This means that they very much prefer to stick with pups of their own size and kind.

If you’re planning a day at the dog beach or putting together another type of playtime, try to give them a bunch of Chihuahua buddies to frolic with!

Fact #8:  When it comes to people, Chihuahuas may not be so friendly

These little balls of fire are unfortunately known to nip at other people quite often.

Even though they’re pocket-sized, they can have a pretty big attitude!

Fact #9: Chihuahuas are known to be quite possessive

If they grow attached to a specific person in the family, they may become overly protective.

Although this is nice for that individual, it may result in the Chihuahua becoming stand-offish or even mean toward everyone else in the household.

This is how they and other dogs like them, got their nickname, ‘armpit piranhas.’

Note: Although Chihuahuas can indeed be a bit feisty, this behavior is only a byproduct of improper care.

If you play with your Chihuahua appropriately and give them the right amount of attention, they will never behave in such a way…

For instance, if you play with a Chihuahua too roughly, you might push them to snip at you.

By being overly physical in your play, you have unintentionally made the tiny dog feel threatened.

Any biting that occurs during playtime is likely caused by this reason.

All you have to do is be careful with your pup, and they will be the little furry angel you’ve always wanted!

And for the last, all you want to do with your Chi is loving each other.