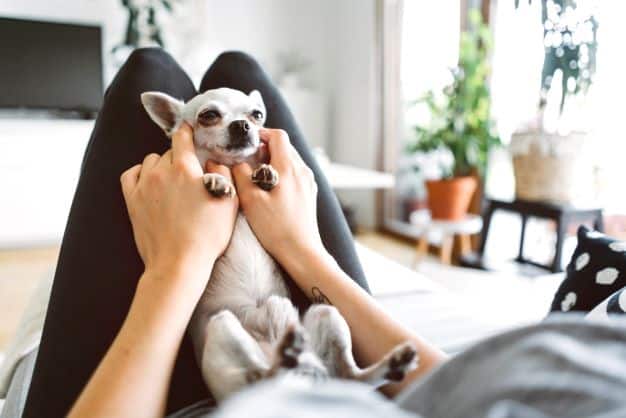 Do Chihuahuas Like To Be Held? 5 Things You Should Know

A lot of people hold their Chihuahua, but…Do Chihuahuas like to be held?

Chihuahuas do not enjoy being held, and they could learn to accept it if their owner starts getting used to it during early puppyhood. Chihuahuas dislike being held by strangers – they feel uncomfortable and can become aggressive.

Five things you should know about holding your Chihuahua

What can tell you better if your Chihuahua enjoys being held or not other than their body language?

This is an important thing to know because it directly affects the bond you have with your dog.

Once you decode your Chihuahua’s language, you can work towards strengthening the bond.

Let’sLet’s look into what your Chihuahua is trying to tell you.

Could you hold me?

Sometimes your Chihuahua could be begging for you to hold them.

If your Chihuahua is used to being pampered, they might come closer to you and beg you to take them in your hands.

It’s each Chihuahua how they will show they want to be held.

Some will whine, others will bark and look you straight. Or, you could notice them pawing at you, standing up in front of you, or just looking at you with affection and expectation.

After you do what they ‘asked” of ‘you, try to see whether they stay relaxed n your arms. When they do, it means they want to be there.

Could you leave me alone?

Chihuahuas are intelligent, and you can expect them to pick up your intention to hold them by your body language. In cases when the dog doesn’tesn’t have it, it will attempt to avoid being held.

This could mean heading to their safe space – it could be their crate, a hiding spot under a chair, the distance between the couch and the wall, and so on.

In addition to trying to get away from your sight, they could:

These are the more discrete signs of discomfort and disapproval. As to the more obvious ones, they’reey’relly:

Some Chihuahuas taken from the animal rescue could associate being held with unpleasant feelings.

They could have experienced some trauma in the past due to how their previous owners were treating them.

Maybe the previous owners handled them too rough. Or they attempted to trim the nails but did it incorrectly.

So, they will need time to adjust after you’veou’ven the Chihuahua to its new loving home.

They might allow you to pick them up but soon become uneasy in your arms and want to come down.

Another scenario is your Chihuahua wants to be picked up, but as soon as you approach them, they move away. It’s as if they’reey’reng, ‘I reconsidered; I’m.

Last, the Chihuahua might want to be held but doesn’tesn’t being picked up. This deserves our attention as being picked up and stored in conflict with Chi’sChi’sghts.

With that in mind, let’s look at…

#2: The wrong way to pick up your Chihuahua

There are multiple ways to go wrong with picking up your Chihuahua.

Please don’tdon’t them up by the front legs as they’reey’remade to support the weight of the dog’sdog’s, and doing so could give your Chihuahua’shua’s a nasty stretch.

Another danger is that this could lead to a dislocated shoulder or elbow, which is very painful.

Besides that, lifting the dog in such a way makes it easy to drop them.

Caution: Children tend to do this as that’shat’sthey would hold their plush toy or a doll. Supervise your Chihuahua during interactions with children.

Yeah, it’s it’sall dog. And yeah – mother dogs do lift their young like that.

But…and that’shat’sg BUT…mother dogs only do this when the puppies are small. This behavior does not continue for long, and it’s natural; if you apply it, you risk injuring your dog. Plus, it’s a sinful process.

The same goes for picking up the Chihuahua by the collar or harness. Just don’tdon’te owners do it, but that’shat’suse they don’tdon’t better.

Lifting your dog by using the collar as a handle could cause your Chihuahua to be out of the air and choke. And you’llou’llly will damage the throat, larynx, and trachea.

Caution: If your Chihuahua doesn’tesn’t have any signs of discomfort with the way you pick them up, it doesn’tesn’t necessarily do with it. Look for the characters we talked about in #1 and be careful.

​But what if you still want to hold your Chihuahua and make picking them up pleasant for them?

This brings us to…

#3: The right way to pick up your Chihuahua

Like anything requiring a particular skill, you should get the hang of picking up your Chihuahua.

Put your dominant hand under the chest of your Chihuahua. Your Chihuahua’shua’s part should be tucked between your arm and body for full support.

Following this method will ensure you have a good grip on your dog and won’twon’t drop them. It’llIt’ll help your Chihuahua feel more secure in your arms.

You can also teach them a verbal command to ease up the process of lifting your Chi.

The aim of this is to prepare your Chihuahua before lifting them.

It’s for us to pick up a small dog, but it could be scary for them if it comes out of the blue.

After all, imagine one minute walking on firm ground and then the other, being lifted several feet off it and hanging in the air. Hint: It’s It’s best.

Make your Chihuahua aware of what you’reou’ret to do by teaching them one word to associate with being lifted.

Use no more than a specific word if you want your Chihuahua to get it.

When you say the word, put your hands on your Chihuahua as if you’reou’ret to lift them, apply a bit of pressure and give them some time to process what’shat’sg on.

Do this consistently before getting your Chihuahua up in the air. Over time they’lley’lln to recognize what’shat’st to happen without being startled.

#4: Why is my Chihuahua yelping when I pick them up?

You’reou’ret if you’reou’reering whether your Chihuahua is trying to communicate with you by yelping.

Many dogs would keep quiet even if they have a reason to yelp. So, what does it mean when it gets to yelping?

In general, yelping is a pain or fear response.

If your Chihuahua recently fell while carried, it might have developed a fear of losing.

Consider whether age could play a role in your case. Older Chihuahuas can suffer from arthritis, and they could be in pain when you pick them up to hold them.

Do this consistently before getting your Chihuahua up in the air. Over time they’lley’lln to recognize what’shat’st to happen without being startled.

#4: Why is my Chihuahua yelping when I pick them up?

You’reou’ret if you’reou’reering whether your Chihuahua is trying to communicate with you by yelping.

Many dogs would keep quiet even if they have a reason to yelp. So, what does it mean when it gets to yelping?

In general, yelping is a pain or fear response.

If your Chihuahua has recently fallen while being carried, it might have developed a fear of losing.

Consider whether age could play a role in your case. Older Chihuahuas can suffer from arthritis—they are in pain when you pick them up to hold them.

By holding your Chihuahua, you’reou’reting their movement. They can’tcan’taround, jump and sniff, and they could feel restricted and thus, not enjoy it.

What could also be painful for your Chihuahua are temporary injuries. Go to your vet regularly to ensure your dog is in good health and physical condition.

This period is crucial for how well your Chihuahua will get along with other dogs and people in the long run.

You don’t have to limit their contact by holding your puppy.

Note: Not treating your Chihuahua as a dog could result in behavioral issues.

A Chihuahua needs to get itself in different situations with other dogs. Part of developing confidence is by allowing your dog to play with others.

When dogs play, there are winners, which can boost your Chihuahua’shua’sidence level.

Your Chihuahua will miss out on them and could start destroying things in the house to get that energy out of their system.

It will if you teach your Chihuahua to always rely on you.

Dogs are adaptable, and before you know it, you could end up with a Chihuahua that sees you as their means of transport.

Don’tDon’tl your Chi that much. Instead, try to teach them some commands and let them be more independent by walking beside you and encountering new smells and dogs.

Start while your Chihuahua is a puppy. Introduce the actions of picking them up and holding them gradually, and do it for short periods in the beginning.

Split the process into two steps. Spend time emphasizing each step and see how your Chihuahua reacts.