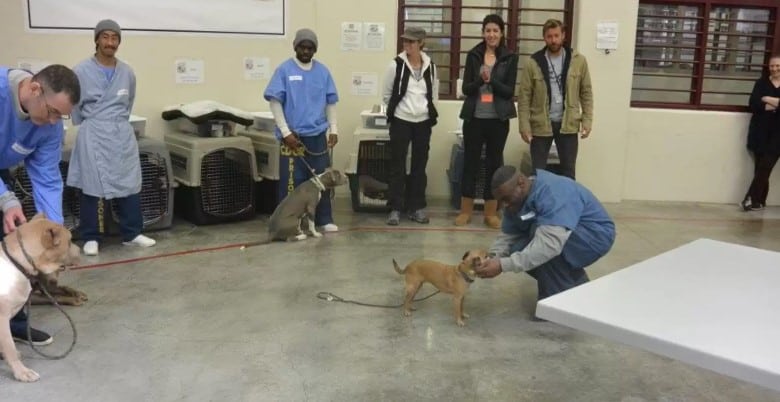 You’d think no one would want to be walking a prison yard with an elderly Chihuahua.

But such is the charm of a dog named Chiller.

These California City Correctional Facility inmates can’t get enough of the 9-year-old shelter dog. They’re co-training, co-parenting, and co-loving Chiller, thanks to an innovative new program that pairs shelter dogs with inmates.

“They all want more masculine dogs,” Zach Skow, founder of Marley’s Mutts, tells The Dodo. “It’s cool to see them with Chiller.”

And Chiller is a special kind of dog

The program, called Marley’s Mutts Positive Change Prison Program, aims to change lives through the universal bond of canine companionship. Each inmate is getting valuable life skills and job skills – and so, too, these once downtrodden dogs.

Rehabilitation can be a two-way street, and perhaps at the end of that street lies redemption.

Few dogs could have used it more than Chiller

For most of his life, his world didn’t stretch beyond his owner’s side. So when his owner took his own life. Police officers found the now-9-year-old Chihuahua hovering over his body.

And so, an otherwise special world opened up for Chiller at Kern County Animal Services. Scared, anxious, and not very social, Chiller didn’t seem long for it.

“He looked terrified, ” Recalls Skow. Who saw him while visiting the shelter to look for dogs for the prison program. “He didn’t display well – an old Chihuahua in a kennel by himself.”

So, he probably wasn’t going to make it without a lifeline. That lifeline would be the program Skow established in February. So Skow took him to prison.

Now Chiller lives with six other shelter dogs and 17 inmates at the facility.

Their kennels are just outside the cells, in the yard. They spend almost every waking moment with their trainers – the 17 men enrolled in the program, many of whom have taken it upon themselves to proudly emblazon ‘Dog Trainer’ on the back of their prison uniforms.

And now, all the doors in the world are starting to open for the shelter dogs and inmates alike.

Chiller, in particular, is getting some much-needed training.

He sits, stays, comes when called, and lays down. Even navigates an obstacle course. His confidence is skyrocketing.

At the end of the course, Chiller, like all the dogs, will take a “Canine Good Citizen Test.” If he passes, he gets a certificate. Ultimately, the training and bonds they make here will serve these dogs well when they’re back up for adoption.

And, in turn, they’re changing the lives of humans.

“[The inmates] journal about it every day. They must break down what the dogs are learning and the pros and cons of their time in prison.

“Our purpose behind this program is to get them to talk openly and understand what they feel personal.”

About their situation, their past and their future.

Feelings. The one F-bomb you generally don’t drop in prison.

Kind of like being seen with a small dog.