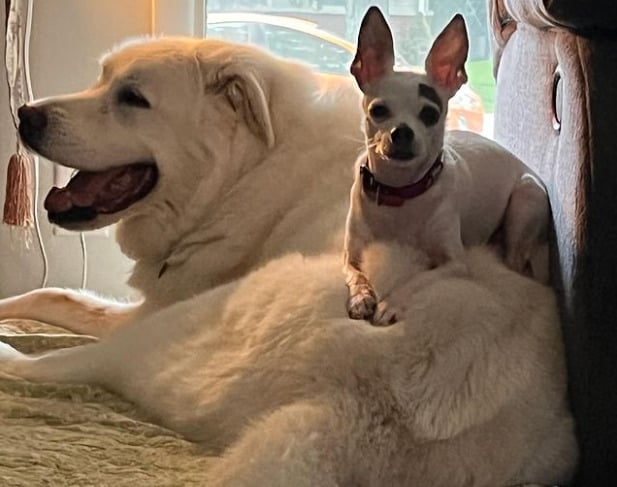 “Chihuahua rides big dog’s back” should be enough to get your attention. But, we can assure you that the story gets even cuter. The little pooch, also affectionately known as Tiny Tim, was filmed during a trip to a lake in McHenry.

As The Beatles famously stated, “I get by with a little help from my friends.” And that sentiment is one that holds to all of us. No matter who we are, we can all get by with a bit of help from our friends, including our furry friends. They, too, can use assistance from their companions. And one little Chihuahua named Tim is the perfect example of this.

The little pooch, also known as Tiny Tim, was filmed during a trip to a lake in McHenry, Illinois, getting carried around the water by his friend Ben, a Great Pyrenees. The gentle giant is appropriately nicknamed Big Ben. The video captured his loyalty to the little pooch by showing how he lovingly let Tim hitch a ride on his back while the two were in the water together.

After the video was posted online, it was captioned, “Sometimes, Tim the chihuahua doesn’t want to swim.” And based on the caption, it’s safe to assume that the little pooch has a flair for the dramatic. But it also suggests that Ben is only more than happy to help his little buddy out. And he gives him a lift through the water.

The big dog actually lets the tiny chihuahua use him as his personal floatation device. And that is precisely the kind of supportive friendships that we should all strive to have in our lives.

The video and adorable photos of the two dogs have even been posted online to Instagram by their owner. The owner of the two even added some background on the two BFFs, sharing that Tim originally joined the family as a foster dog from Texas. He took to Ben right away, and eventually managed to get the big pooch to agree to be his “personal couch, step stool, and friend.”

What a persuasive little Tim. The two spend a lot of time together, with Tim often taking his preferred spot on Ben’s back. And Ben seems more than okay with it. How adorable!