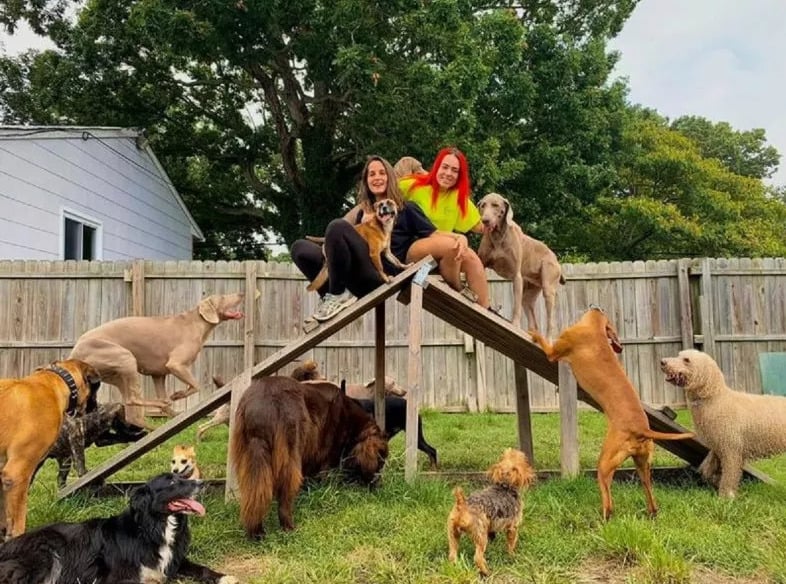 If keeping just one dog can seem like a problematic commitment at times, spare a thought for these women who share their home with 30 dogs, ranging from chihuahuas, Dobermans, and even a Great Dane.

As Newsweek has reported, Toni and Lydia Enright have shared their life with a pack of 30 dogs under one roof on the TikTok account @thedogmoms. The couple regularly share clips of all their canines roaming the house, taking over the furniture, and going for walks as one giant pack.

The married duo lives on a 24-acre farm in Virginia, allowing their animals plenty of space to wander around and get their daily exercise.

Toni Enright told Newsweek: “I don’t know if I could tell you why I chose this lifestyle, but it’s more that I followed what felt right to me in the present. In other words, my intuition. Connecting with animals has always been something my soul desired.”

Although keeping 30 dogs has become the norm for this couple, they are used to getting shocked reactions from people they meet in person or online through social media.

Enright continued: “When it comes to reactions from people experiencing our world for the first time, I would say their first emotion is usually shock. But then they’re quickly overwhelmed by how incredible it is to see so many dogs of different sizes, breeds, and ages, as well as a cat, ducks, chickens, a pig, and geese all beautifully coexisting together as one family unit.”

Among the dog breeds that the two women have, there is a Weimaraner, Pomeranian, border collie, Vizsla, Yorkie, French bulldog, English mastiff, Newfoundland, Belgian Malinois, and a Great Pyrenees, with some of the dogs being rescues.

According to the American Pet Products Association, the number of dogs rescued in America has risen in recent years. The survey data shows that in 2021, 40 percent of dogs were rescued from shelters or humane groups. It compares to just 21 percent of dogs purchased from a breeder in the same year.

Not to let other people’s shocked reactions put her off, Enright spoke about how she would never change her lifestyle. “For the past 20 years, I have been developing a pack of dogs. They can help humans reconnect with mother nature. They have a purpose, and I was the human vessel to finish connecting the lines,” she said.

“My need to be around, observe and connect with mother nature was strong. I don’t think I could have gone down any other path. It’s not something that anyone has ever seen before. The magical experience here speaks volumes to the soul, and it’s one that you can’t ever forget.”

As they regularly post videos to share what life is like with so many animals in one home. They have developed a devoted following of people fascinated by their way of life. While many of the videos have generated over 10,000 views, one particular TikTok video went wildly viral. It amassed 1.6 million views at the time of writing.

The video shows many dogs lying calmly in one room, observing their owner welcoming a guest into the house. The video’s caption reads: “We have people come to our house daily. And never worry that our dogs will act a fools. Whether they know the person or not, their reaction is always the same, relaxed and respectful.”

Many of the comments are used to ask the owners questions. Such as one comment which asks: “Do they each know their names, or do they all come running when you call one?”. They will often answer these questions with another video. And to give people a better glimpse into their life. It answered this specific question with a video of the dogs coming one by one, as it called them.

Living with 30 dogs would no doubt be a considerable challenge. But these women are devoted to it, and as they put it, they “wouldn’t have it any other way.”