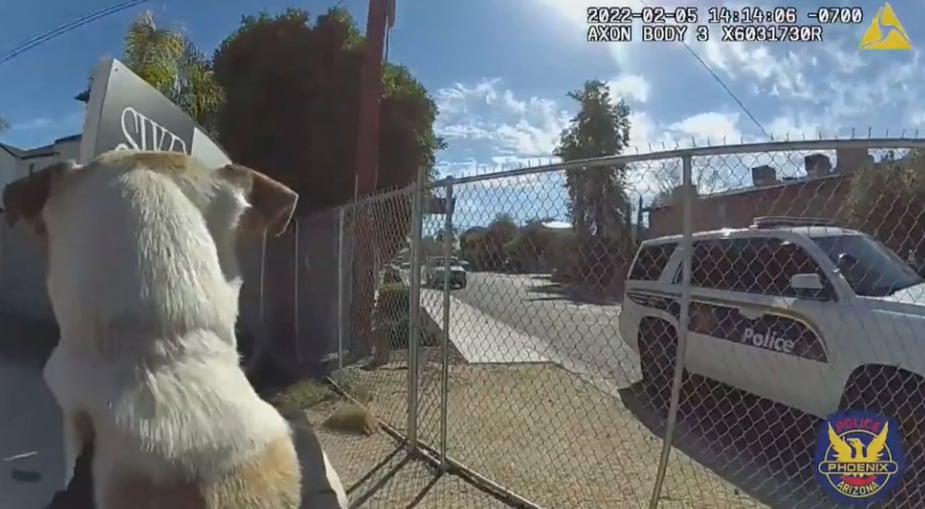 PHOENIX (3TV/CBS 5) – When Phoenix police officers say they protect and serve, they are not talking only about people. Of course, they help people, but they also have a soft spot for animals in need – animals like a puppy named Pickles. The Phoenix Police Department tweeted Thursday about the rescue of Pickles, including a body camera video. According to Phoenix PD, officers found out about Pickles on Feb. 5. The little dog was inside a pillowcase that somebody had knotted closed and thrown over a fence. That was a month ago. Today, he has a new family.

The edited video posted on Twitter by Phoenix PD shows an officer walking up to the pillowcase as Pickles barks. “You’re OK, baby!” she said as she bent down to cut a hole in the pillowcase to get to the trapped pup. Pickles immediately poked his head out. “Hi, buddy!” the officer said, answering the dog’s yips and whines. “You’re OK.”

“C’mon, let’s go get you over to Blue Pearl,” she said as she picked him up. Blue Pearl is an emergency veterinary clinic. The dog did not appear hurt but needed to be checked out. “He’s skinny,” the officer said. The video shows the officer walking to her patrol vehicle, Pickles in her arms, and grabbing a baggie of dog food, which Pickles happily munched in the backseat of the SUV.

Police are looking for the person who abandoned Pickles. The people who told officers about him did not see who threw him over the fence. Animal cruelty in Arizona can be charged as a class 5 or 6 felony or a class 1 misdemeanor, depending on the circumstances. Under the legal definition, anybody who “intentionally, knowingly or recklessly subjects any animal under the person’s custody or control to cruel neglect or abandonment” can face a charge of animal cruelty.

Pickles and his new family

Pickles, who looks like a part chihuahua, was later adopted by a Chandler family Thursday afternoon. Judging by the nonstop tail and the wiggles, he was super excited.