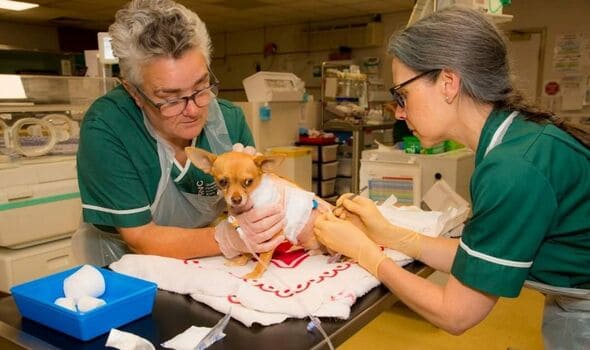 Jac Williams was left with no other option when she received a quote for the life-saving surgery her chihuahua desperately needed.

A devoted chihuahua owner forked out £17,500 to save her chihuahua’s life after receiving the eye-watering vet bill. Jac Williams, 54, flogged her Nissan Qashqai for around £15k so little Louie could go under the knife. The puppy, now 10, was diagnosed with mitral valve disease in 2020 – which can be deadly without surgery.

Fearing she would lose her beloved pet, Jac, from Wareham, Dorset, she sold her motor and dipped into her inheritance to pay for the pioneering procedure, MyLondon reports.

Louie is doing well following the operation on August 8. And his owner says she has no regrets – despite the cost.

Jac, retired but used to work for the RSPCA, said: “I started to see a decline in Louie’s health. But he’s only ten years old, and chihuahuas can live to 16 or 17 years old. I asked what our options were, and the vet mentioned there was surgery. But it was pretty new and costly and very specialized.

“The operation itself, without all the scans, was £17,500. Although it was a lot of money, I thought I owed it to him. He’s such a sweet little dog. I love him to bits. He had the surgery, and he’s done amazingly. He’s just a little superstar! I know it’s a lot of money, but at the end of the day, if you love your dog that much, at least there’s an option.”

Louie was diagnosed with mitral valve disease after vets discovered something was wrong with his heart during a pre-examination before getting his teeth cleaned two years ago.

He was sent to a cardiologist who diagnosed him and told his owner Jac about new life-saving open heart surgery where the mitral valve is repaired.

The surgery came with an eye-watering price tag – but Jac knew she had to do everything she could to save her beloved dog.

She said: “After the diagnosis, they put him on medication, and he was quite stable for a year and a half. But then, this January, they said there was quite a marked deterioration, and we would start to see clinical signs. Until then, there were no outward signs that he had a problem – he could run and jump and didn’t get out of breath. You wouldn’t know. The surgery is only done in three places in the world – one in London, another in Cambridge, and one in Japan. We got referred to London, who did an examination, and they said things were going the wrong way, but he is a candidate for the surgery if we want to proceed.

I didn’t think he would come home

“I spoke to the surgeon, who said we had nothing to lose but a lot of money. Because Louie would die without the surgery and probably by the end of the year.”

Desperate to save her dog, Jac decided to sell her two-year-old car for around £15,000 and then used the money she had inherited to make up enough for the surgery. Louie underwent a mitral valve repair at Royal Veterinary College in London. And spent three to four hours under the knife.

His heart was stopped for between an hour and an hour and a half. And Louie went on a bypass and had a blood transfusion during the repair. After a week of recovery, the precious pup stayed in intensive care for two days and finally left the hospital.

She said: “The week before he went in for his surgery, there was a massive deterioration. His breathing was bad, and when I handed him over, I didn’t expect to get him back again. I knew the surgery was his only chance. I didn’t think he would come home.”