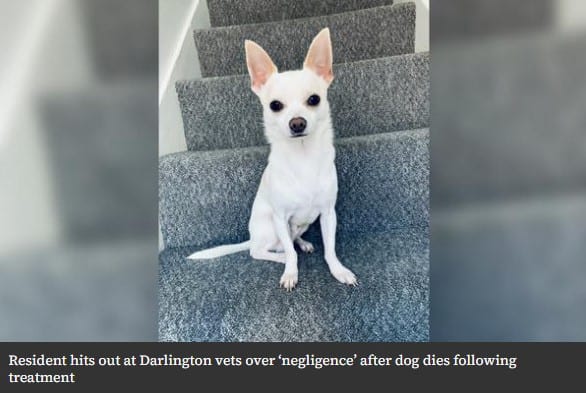 Dog Owner Hits Out At Vets4Pets After Chihuahua Dies

A devastated dog owner has hit out at the treatment of his three-year-old. Chihuahua received after it died despite a clear set of blood tests.

Levi, who was three, had been suffering from sickness and diarrhea, and to begin with, his owner Keiran Scott, from Darlington, brushed it off as a slightly upset tummy.

However, the dog also became lethargic, so he took him to the Vets4Pets practice in Darlington.

The vets found that Levi’s temperature was low and prescribed him antibiotics for sickness.

But soon after returning home, Levi deteriorated, could not move from his bed, and continued to suffer from diarrhea.

Mr. Scott, therefore, returned the dog to the vet. And this time, blood tests were carried out, which showed that the three-year-old chihuahua was fine but a bit dehydrated.

According to Mr. Scott, the dog was soon sent home, despite showing slight improvement.

However, shortly after midnight that night, Mr. Scott discovered Levi had died.

Mr. Scott believes that due to Levi’s precise blood results, the cause of his death was dehydration.

Mr. Scott was also left with £400 worth of vet bills and believes the staff at the surgery should have shown more compassion towards him.

A spokesperson for Vets4Pets said: “We were very sad to hear of the passing of Mr. Scott’s dog Levi. And our thoughts go out to him and his family at this difficult time.

Pet health and welfare are always our priorities. So we have been in regular contact with Mr. Scott since these concerns were raised and are currently reviewing this case.

Vets4Pets says it is continuing to discuss the case with Mr. Scott, and a bid to resolve the situation is ongoing.