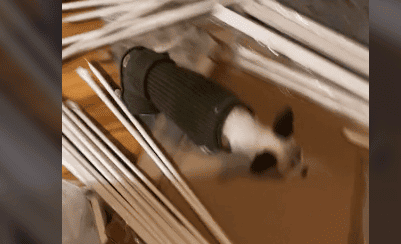 Everyone has one where things don’t seem to go right. Even animals. It’s okay to have an off day! But we think in times like these, it’s always good to be able to laugh at yourself. Don’t say that to one dog on TikTok who risked it all to show off his “parkour” skills and failed big time.

Luckily for us, the puppy’s owner, Katie Metcalf (@katiemetcalf), captured the embarrassing incident and shared it in a recent video online. The footage shows the senior dog zooming across some metal rods his mama had to lie on the ground. Usually, he might have cleared the obstacle course, but unfortunately, he couldn’t stick the landing at the end. “The grunt at the end,” Metcalf joked in the caption.

The video has since been watched over 1 million times, and people could feel the secondhand embarrassment. “That roll made him forget where he was,” @thatgreentree wrote. “Homie had to lay down and think like, damn, these floors ain’t never been this hard to walk on,” @oh_toska joked. “That was a pretty good dismount from the balance beam,” @jay.sdca added. “Oh no, he looked embarrassed at the end,” @brandie_a agreed.

While other people joked that this was all too predictable. “All senior dogs have to be involved with everything,” @listen.linda.listennnn mused. “This is EXACTLY what it’s like having a senior dog,” @liddom07 agreed. “Senior dogs OMG. Like puppies but with less spring,” @teasa20 commented. “Senior dogs are so extra,” @stargqzerr chimed in.

We want to say that we think this dog learned his lesson the hard way..but that doesn’t seem very likely. It’s okay, little pup. We’ve all been there.