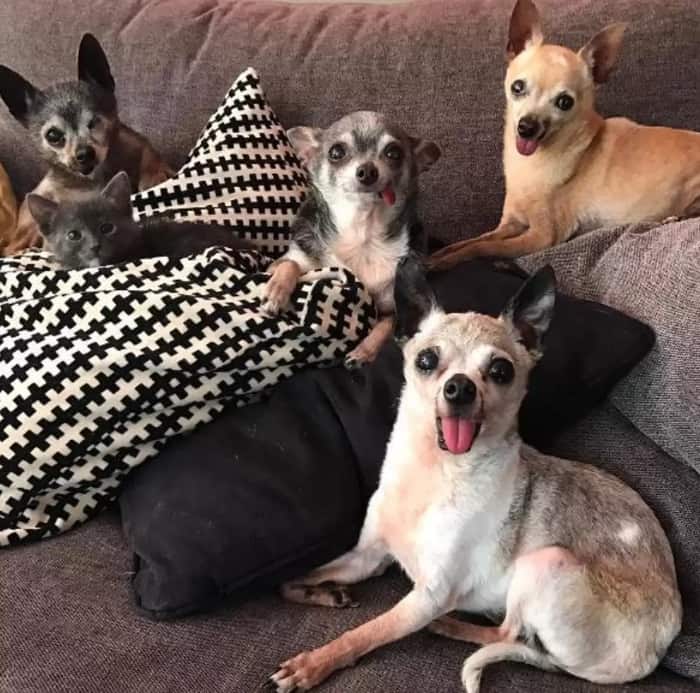 She’s the only one who has teeth. MoMo, Choli, Paloma, and Benito are four senior Chihuahuas who were all adopted into the same family. None of them have teeth, and they spend most of their days sunbathing, eating, and, of course, napping. Their home was much like a retirement community – until their mom brought a tiny kitten.

Julie Docherty has been volunteering in Skid Row in Los Angeles with the Love My Neighbor Foundation for over a year. She helps hand out food and clothes to the homeless and others in need. And sometimes people bring their pets with them. But when she saw a young woman carrying a tiny, crying kitten, she knew something was different.

“She explained she had just saved the cat from being tossed around in one of the tents (which line the streets as makeshift housing),” Docherty told us. “She knew she wouldn’t be able to keep it. And she was asking if any of us knew a rescue where she could take the cat. Not having a game plan in place, but knowing I had to save this kitten, I came home with a cat that day.”

Docherty took the little kitten to the vet and learned that she was only 2 and a half weeks old. And would need to be bottle-fed every few hours around the clock in order to survive. He knew she had to help her – but was worried how her senior Chihuahua gang would react.

Docherty was certain she wouldn’t be able to keep the little kitten, whom she later named Rosita, for fear of stressing out the seniors.

As it turns out, though, they actually kind of like Rosita.

“The pups were very inquisitive with her for about five minutes and then totally unfazed,” Docherty said. “Choli seemed to be most interested to play, which didn’t really surprise me. I’ve always felt he is a bit cat-like himself.”

MoMo is incredibly loving and patient with Rosita, while Benito is still a little timid and not quite sure what to make of her. Paloma used to be a breeder dog, and seemed to have very little interest in taking care of a baby again – but no matter what, Rosita lived in their home now, which meant she was family.

The senior squad welcomed little Rosita into their group, even though sometimes she’s a tad energetic for their taste.

“Her energy level goes from off the charts and then immediately to a nap time, which is much more accepted by the crew,” Docherty said.

The newly formed squad of five eats together …

… and takes the BEST group photos ever.

While her new parents are still waiting to see how things go, Rosita has most likely found a permanent home with her new senior Chihuahua grandparents – and it seems she couldn’t be happier about it.