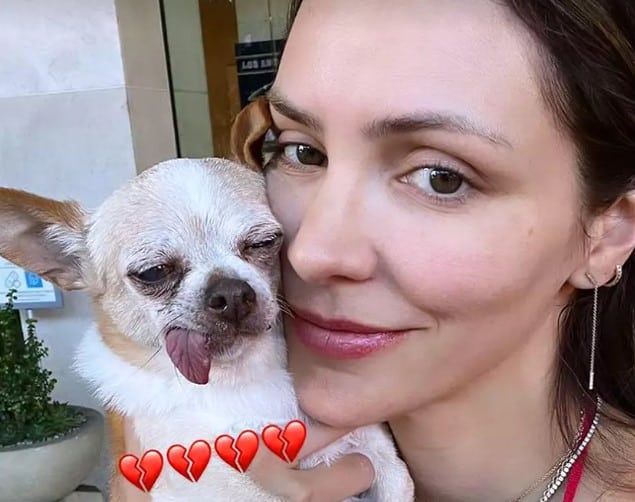 The actress, 37, shared on her Instagram Story Monday that her adopted chihuahua had died. McPhee posted a series of throwback photos and videos of Wilma, whom she adopted as a senior dog.

The Country Comfort star began her tribute with a photo of her late enjoying time outside, which she followed up with another image of Wilma sitting in the backseat of a car.

“Here’s a little tribute to my girl Wilma. Also known as Willy… my husband (David Foster) called her that. And then I started calling her Willy Pie,”she began.

McPhee then shared Wilma’s adoption story, telling her followers, “I adopted Willy when she was 12. I thought I’d do a nice thing and give her maybe a year or 2 of a good life, but this girl kept on going.”

Noting Wilma’s adorably unique face, McPhee wrote, “And wherever she went her tongue was hanging out without fail.”

Sharing footage of Wilma accompanying her to rehearsal for the Broadway musical Waitress, she added, “She traveled the world with me. Was at every rehearsal for my first Broadway show.”

McPhee, who previously owned chihuahuas Larry and Nena, said Wilma “outlived even Larry who was my pride and joy but still managed to steal my heart.” She added, “Kept me company – always. Thank you Willy for all the great years.” It is not immediately clear if Nena is still alive.

To close out her eulogy, McPhee shared photos of Wilma with her other pets, writing, “Oh Wilma … You sweet sweet girl. You fit right in from the very beginning. It’s as if you were here all along.”

On the final slide about Wilma, McPhee simply wrote, “You will be greatly missed.”

McPhee is a vocal animal lover who often shared sweet moments with her pets on social media and was seen out and about with her dogs.

In a 2011 interview with PEOPLE, the former American Idol star said she brought Larry and Nena to work with her on the set of Smash, noting that her costar Bernadette Peters loved the pets.