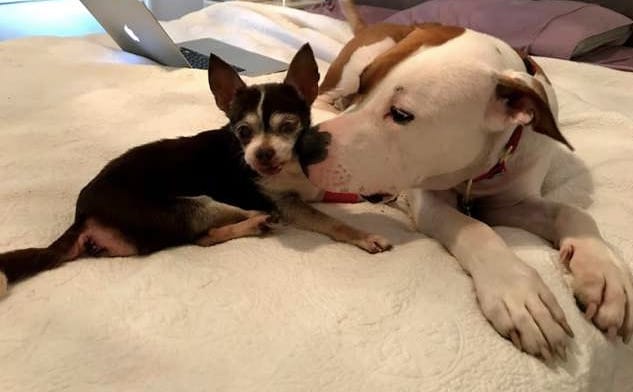 A viral photo showing a tender moment between pit bulls and a Chihuahua has become an iconic image dispelling vicious rumors about pit bulls being a blood-thirsty breed.

First surfacing on the animal-loving internet six months ago, the image makes the soft side of pit bulls pretty blatantly clear.

My mom sent me this photo of pit bulls. And a chihuahua who got adopted together, wrote Reddit user Rigoletto.

And it isn’t the first time a pit bull has snuggled up to a tiny canine friend.

One video shows a similar odd couple: Pit bulls being incredibly tolerant of his feisty Chihuahua.

Indeed, there appears to be a whole underground Facebook following of the particular match.

They go together, as it’s said. Like a wink and a smile.

Are chihuahuas as aggressive as Pitbulls? Why or why not?

Chihuahuas rank #1 in aggression temperament testing. Dachshunds are right behind them, followed by Jack Russels. Pitbulls? They rank at the bottom of the list, behind Labradors, in aggression. So what does this tell you?

It tells me that people, more often than not, respond to what looks scary, not what actually is in reality. A Pitbull dog, when raised with love and good training, is an excellent family dog who is loyal to the point of death. Pitbulls have taken a bullet for their owners. Chihuahuas? Don’t lay down next to them wrong, or they’ll bite you.

The media doesn’t help either, as they only report cases of Pitbull dog-type attacks as that’s what sells/gets clicks/shares. The issue with this biased type of reporting is that most people can’t even correctly identify a Pitbull (which is a recognized breed. The American Pit Bull terrier). At this point, any dog with a blocky head and a broad chest is classified as a Pit. This is a huge issue not only in reporting of bites but also in shelters where a “Pitbull” is immediately put to death in many cities.