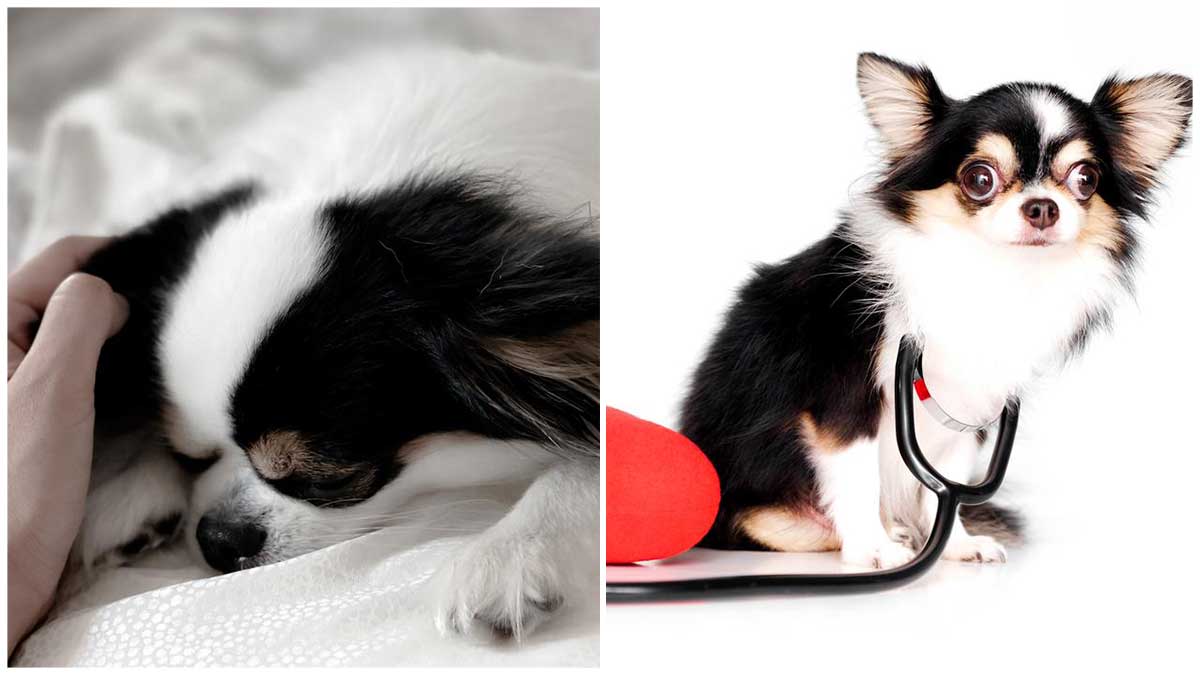 Four Critical Things that Every Chihuahua Owner Must Know

You may not realize it, but your dog could suffer from a life-threatening condition. You see, dogs are incredibly good at hiding their pain. By instinct, they are pack animals, so they hate to show any sign of weakness. It’s against their nature! Your dog’s silence allows diseases to spread or get worse, which can, in worst-case scenarios, be fatal. As a Chihuahua owner, there are things you must know.

We have looked at the four most common ailments and diseases dogs might experience. You should be aware of these things, as your pup might not let on.

Some don’t have symptoms, so regular vet health checks are essential to ensure your dog is not at risk! As a Chihuahua owner, it’s your responsibility to ensure this.

The leading cause of death in dogs over the age of 10 is cancer. About 50% of older dogs develop some form of this deadly disease.

Some cancers can be visibly spotted when a tumor appears. Especially when there is abnormal cell growth in the body that cluster together. However, some cancers don’t show, and even those that produce tumors aren’t always very obvious. These are likely to be caught later and can be impossible to treat.

There are different types of cancers that are commonly seen in dogs. They can affect the skin (e.g. mast cell tumors), the lymph nodes (which create tumors on the glands), and the breasts of female dogs. Female dogs spayed are less likely to develop cancerous tumors, but are still not exempt from them.

When found early on, cancer can be treatable through surgical removal of tissues and tumors, or chemotherapy. Of course, as a Chihuauha owner, you want your dog to live as long as possible. But you need to decide with your vet if it’s worth putting them through surgery, as some pets could find it too traumatic. Pain relief is essential to keeping your dog as comfortable as possible during those hard times.

Symptoms may include swollen body parts, a loss of appetite, weight loss, lethargy, breathing difficulties, digestive problems, and limping. Different types of cancer would cause other symptoms if any.

Often, heartworm disease is caught too late in our dogs, and the results can be fatal. Its symptoms aren’t obvious, giving the disease freedom to spread. Heartworm disease can affect the blood vessels, lungs, and heart, which can cause heart failure, lung disease, or damage to other vital organs.

Heartworm disease is one of the main killers in pets, including dogs. The disease is transmitted when the dog is bitten by an infected mosquito, which will often bite at the part of the dog with the thinnest hair coating (the stomach, for example).

The disease can be found all over the world, and in the US, every state is at risk of the spread of heartworm disease in their canines. During seasons with more mosquitos around, there’s a higher chance of your dog contracting heartworm disease. But, as a Chihuahua owner, you must know that colder months still pose a risk.

There are steps you can take to prevent the spread of the nasty mites, by having annual checkups at the veterinarian, where they can diagnose heartworm by doing simple blood tests. If your pup is unfortunate enough to have it, injections are given to kill the heartworms. After this treatment, let your dog rest for a few weeks, because their organs will be recovering. There are also preventative medicines available, which can be taken in different forms – similar to how we can take malaria medication. It is best to ask your vet which type is best for your dog and the area you live in.

Symptoms won’t show until the later stages. But, they may present in the forms of a constant cough, fatigue, hesitance to exercise, loss of appetite, and weight loss.

Kidney disease is an incurable condition in dogs. And the onset is often correlated with the age of your hound. Deterioration of body parts occurs over time, and the kidneys are no different. When kidneys are diseased, they fail to filter out the toxins in the body, which can affect the function of other vital organs.

It is said that dogs can go months – even years – without any symptoms of kidney disease. That’s because it could take two-thirds of the kidneys to destruct before signs appear. Since it can take a while for symptoms to show, it is difficult to know how to help your poor friend if it happens to them.

Just be aware that bigger dogs age faster, so if they are going to get kidney disease, insist on a checkup from the age of 7. Smaller dogs are likely to hold off until ten years old. (This is a rough guide – if you have concerns, take your dog to the vet).

One symptom that your dog could be developing kidney disease is if they get a Urinary Tract Infection (UTI). As a Chihuahua owner, you must ask your veterinarian to check your pup’s kidney health. For this, they can do it through urine and blood tests. There is no treatment to fix the problem, but your dog can be given medication to slow down the progression and relieve some discomfort.

Arthritis is the inflammation of joints, affecting a vast 65% of dogs over the age of 7 in the United States. While there are ways to reduce the amount of pain your four-legged friend might be in, there is no way to cure it (aside from joint replacements). When your dog’s joints become inflamed, they lose cartilage and fluid, which allows the bones to rub together – this wears down the bones and can be extremely painful!

As a Chihuahua owner, you ought to know that arthritis tends to happen with age or injury. So, as your puppy gets older, their bones may become weaker, and joints become squeakier. It can also be caused by excess weight, so if your dog is overweight, their joints are strained. As there is a link to more pressure on the bones, it is more likely to occur in larger sized dogs, such as Labradors or German Shepherds.

You may think arthritis is just painful, but it can lead to further life-threatening problems. There is the risk of becoming overweight – if your pet is finding it difficult to be active, they’re likely to put on weight. Being overweight, or becoming obese, puts your dog at risk of heart disease, skin disease (due to the rolls in the skin causing irritation), and even worsen the joint and ligament pain they may already suffer!